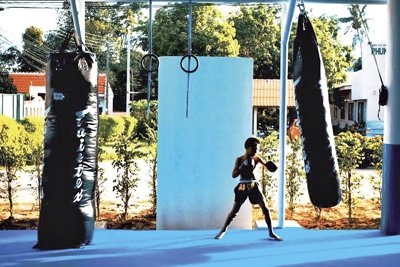 PHUKET: Imagine that you are thirteen years old and school just isn’t your thing. Your mother lives with her new boyfriend in another province and you’ve been in trouble quite a bit lately – understandably so.

Now imagine that amidst this unstable period of your early life, someone offers you the chance that many poor Thai boys dream of – to train professionally in Muay Thai.

You won’t have to pay for the training, you’ll even earn money (some of which you’re expected to give to your mother) and your boarding will be paid for by the gym. Best of all, it’s in Phuket.

This was the offer made to Witsanu “Nong Arm” Mamohchoke, now 14 years old, and the latest addition to Phuket Top Team (PTT) Gym in Chalong. Called “Yoduman” by his trainers, Nong Arm is from a province in Isaan near the Laos border. He has been training professionally at Phuket Top Team for 3-4 months.

It’s important to give some background. Phuket Top Team does not force Yoduman to fight nor is he the youngest professional fighter in Thailand today.

In traditional Thai gyms, it is sometimes customary for training camps to take on poor children who’ve chosen to pursue Muay Thai as a career, instead of the schooling they often cannot afford.

To this end, gyms may act as what we would think of in the West as a boarding school. The gym assumes all responsibility for taking care of the fighter and pays for his housing, meals, medical bills and training

What is interesting about the situation between Yoduman and Phuket Top Team, is that this kind of arrangement is being conducted between a foreign-owned gym and a young Thai fighter – certainly not the norm.

“He’s basically living like an adult now in his own bamboo apartment [on site] with another kid who’s 16 years old. He’s fighting regularly – it’s a full-time job,” says Phuket Top Team owner Boyd Clarke. “We’ve had four different kids come through and out of all of them he’s been here the longest and seems the most passionate about it.”

Yoduman says he enjoys his time at Phuket Top Team, although it is sometimes difficult. He trains six days per week, running early in the mornings and resting only on Sundays. To date, Yoduman has had four fights, with a record of three wins and one loss.

“He wants to be a champion and has told the other trainers that he’d like to fight outside of Phuket. As a young kid, I guess he doesn’t know exactly what he wants but one thing that he does know is that he’s getting paid,” said Mr Clarke.

Phuket Gardening: The last of the red brigade