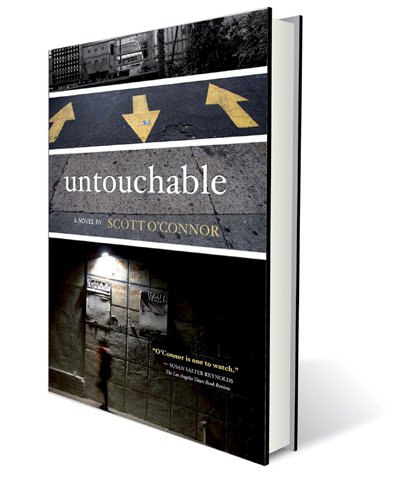 PHUKET: Recently I reviewed a pair of books – The Lifeboat and The Starboard Sea – by a pair of first-time female novelists that were competent enough in terms of prose and plot but sorely lacking in characterization. In a word, they lacked heart.

Scott O’Connor’s Untouchable (Tyrus Books, Blue Ash, Oklahoma, 2011, 381pp) is chock full of heart: that rich emotional identification with a character that arises from inhabiting that person from the inside out. The grief and fears of a motherless child become yours too.

“Here he comes, Whitley Earl Darby, commonly known as The Kid, big head, big feet, spindly body, the whole contraption threatening to tip over at any moment as he navigated the buckled sidewalk, readjusted the weight of his overlarge backpack. Here comes The Kid, make room, make way. Don’t get too close. Known to have germs, cooties, bad breath, B.O. Known to be diseased, known to be contagious.”

The Kid is eleven years old and the pariah of his schoolroom class, persecuted ruthlessly by bullies, always on the alert for flight. He shares a small rundown house in a bad neighborhood in Los Angeles with his depressed, grief-stricken father. The two live on fast food.

According to the father, the mother collapsed one day while teaching her high school history class. The Kid doesn’t believe him. Influenced by his only friend, Matthew Crump, son of militant fundamentalist Christians, he swears a covenant not to speak until his mother returns home. He communicates by notepad.

“Smooshie was the most popular talk show host in the history of TV because he had a time machine that let him go back and forth through the years and interview all sorts of people.”

When his mother was still alive and he was still speaking, he also had his own imaginary TV interview show called It’s That Kid! Every episode was carefully preserved by his mother on cassettes.

His memories of his mother – cooking up a storm in the kitchen, cheering on her beloved LA Dodgers in Dodgers Stadium – are rendered in virtual prose poems.

His father is equally grief-stricken, a situation not helped by his job on a cleanup crew for exceptionally messy suicides and murders. He is further burdened by knowing the real cause of his wife’s death. But he is capable of his own prose poem about growing up with his grandmother in the New Mexico desert. While working construction on a gated retirement community, he’d sneak in to be alone.

“He would find a filled pool and strip down to his underpants, lie on his back and float. Watching the tops of palm trees moving against the purple sky, feeling the warmth of the water, his skin taking on sun. When his ears bobbed under there was a rushing sound, a seashell roar, and when they came back about there was nothing, just the silence of the desert.”

Then two things happen that jolt father and son out of their dismal routines. The father rescues a huge half-mad dog that has been trapped in a nearby sewer. “The dog was a good idea,” the father thinks. “The dog would forget the sewer; forget the pound, and then the dog would be fine, friendly and fine.” Now, how to communicate with the dog?

The son explores a house that has recently burned down. Someone has left a ceiling-high pastel chalk mural of a red-haired angel in the charred living room, wings lifting up to the sky. The Kid takes over the opposite wall to respond with his own crowded mural of everyday life, gradually gathering three companions from school and drawing them into this site of mystery.

Alone and together, father and son confront their loss and grief. They battle to find their voices and to reunite at last on the eve of the new millennium, beneath a desert sky. It’s been a terrible but triumphant journey and the reader shares in their sense of redemption.

Phuket Gardening: The last of the red brigade