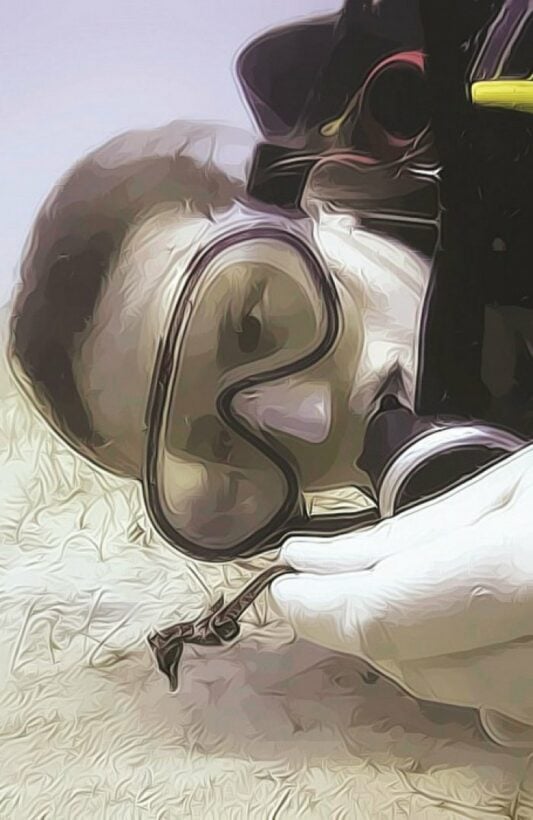 Lindsay was ushered into the upper echelons of seahorse research while working on her doctorate with her adviser Amanda Vincent – recognized as the leading expert in the field – and Project Seahorse at the University of British Columbia. Lindsay looks to finish her PhD by the end of the year. However, her fateful ‘mistake’ was made about eleven years prior, when she was an undergraduate studying abroad at James Cook University in Australia.

For the final project of a marine conservation course, students had to sign up to write a conservation status report about a specific marine animal. The options were listed under scientific pseudonyms on the professor’s door. Enter the hippocampus.

“So you had to go and sign up for this random Latin name, and who knows the Latin names of fish as an undergraduate? I would argue nobody. Okay, maybe some people do, but not me,” Lindsay says.

“So there were some obvious ones, Delphinus delphis – oh, it’s a dolphin. All those were taken, but I saw hippocampus. It kind of sounds like hippopotamus. I wonder if there are hippos that live in the ocean?”

Lindsay can now confirm that hippos do not live in the ocean.

However, Lindsay wasn’t far off, at least when it comes to the scientific names. For both hippopotamus and and hippocampus, ‘hippos‘ means horse in Ancient Greek. However, ‘potamos‘ means river, and ‘kampos‘? Well, that’s ‘sea monster’. Given her knack for marine adventures, it is probably more appropriate that Lindsay ended up with the sea monster.

Lindsay first came to Phuket after her friends survived the 2004 tsunami. They had been diving off Phi Phi when the wave washed over the island. She arrived with supplies and then became one of the first in a group of divers that were certified by PADI as instructors following the disaster.

Two years later, Lindsay made contact with Dr Vincent. However, she didn’t join Project Seahorse, recognized as the global leader on seahorse research, until 2012. Then, in 2013, Project Seahorse was asked by International Union for Conservation of Nature and Natural Resources (IUCN) to form a specialist group to advise on seahorses. Lindsay made the cut.

Also in 2013, Lindsay joined a team from Project Seahorse which served as consultants to the Hong Kong government to do an assessment of the impact a controversial beach re-nutriment project might have on seahorse populations in the area. Final assessment: there would be minimal impact, despite the environmentalists’ concerns.

“We also came up with a mitigation plan to try and find all the seahorses in the area that was going to be developed and then move them to a similar habitat and monitor them. It would be a good chance for some scientific research about moving seahorses from one habitat to another and also allow the beach to be developed,” Lindsay says.

Finding the seahorses – renown for their camouflaging abilities – would need to be sorted out by the government at a later date. However, Lindsay’s most recent adventure brought her face to face with a man who has a sixth sense for seahorses – Paul Ferber.

“He kind of has this premonition of where to find seahorses. You jump in the water with him and literally within seconds or minutes find seahorses, which compared to some of the research we’ve done in Thailand is amazing,” Lindsay says.

“Paul runs a group called Marine Conservation Cambodia and they have been working in Cambodia for I believe the last five or ten years monitoring seahorses at some of the coastal islands. They have been asked to do so by the government.”

Lindsay was there last week to train Paul and his team about how to give seahorses fluorescent ‘tattoos’ in hopes of tracking their numbers and curbing illegal fishing.

In Paul’s tow to ‘base camp’ on Koh Sep, off the coast of Kep and within swimming distance of Vietnam, Lindsay saw how serious the team was about protecting the thick, vulnerable seagrass beds in the area.

“They are working with the local fisheries staff to help them increase local enforcement and patrols of the area. There are lots of Vietnamese boats that come in and illegally fish in these areas in Cambodia.

“I wasn’t quite expecting to be part of any of these patrols on my trip out there. One minute there was a Cambodian guy chilling out in his board shorts and tank top, the next minute he’s putting on his official Fisheries Department uniform and unwrapping this super rusty AK-47, because they saw an illegal fishing boat and wanted to stop the boat and ask them to leave.”

Rough monsoon seas added to the wild nature of the events as they unfolded before Lindsay and a group of British undergraduate students joining Paul for some terrestrial research.

“There was a lot going on and at one point they were like ‘keep your hands inside the boat, stay low guys, stay low’. Eventually, the fishermen pulled up the net and dumped the fish back into the ocean.”

It hasn’t been all seahorses for Lindsay. She’s done the turtle rodeo, hand released 1-meter-long juvenile lemon sharks, jumped for dugongs… the list goes on. Here in Thailand though, Lindsay is entering the final stages of a three-pronged seahorse sustainability project, which included on-location diving for seahorses, interviewing fishers and researching the seahorse export business (story here).

“Project Seahorse and I are wrapping up a project with the Fisheries Department to help them assess the sustainability of their seahorse exports.

“We are now at the final analysis stage and reporting back to stakeholders and colleagues phase, which is why I’m back in Phuket, where I based myself for the initial research phases of the project.”

Life of a ma song