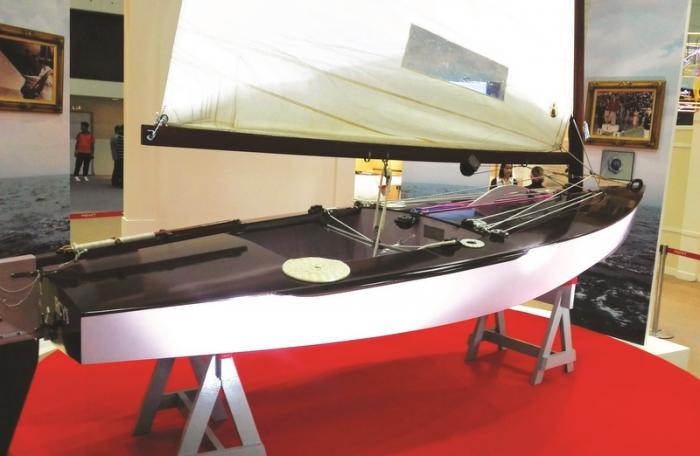 PHUKET: I recently attended the National Science and Technology Fair in Bangkok at IMPACT Muang Thong Thani. The attraction for me was a Royal Pavilion that included boats made by His Majesty the King of Thailand.

Many will know that His Majesty has built a number of boats in his time. Twenty-five to be precise, all dinghies. His first was Rajptain, an Enterprise Class dinghy which he raced against Prince Philip the Duke of Edinburgh in 1965 from Pattaya to Koh Larn, and won. All 25 are still in working order and are kept with the full fleet (100 in total, many of them gifts) at Chitralada Palace and Tha Wasukri in Bangkok, and Klai Kangwon Palace in Hua Hin.

His Majesty created ‘The Royal Mott Class’ in 1966, which was designed within the parameters of the ‘International Moth Class’ and between 1966 and 1967 built a number of boats in the class using three of his own designs: Mod, Super Mod and Micro Mod. His Majesty registered the Mod design at the Patent Office in Great Britain and the Super Mod, a smaller and lighter version designed for easier sailing by Thai people, was on display at the fair. Despite being 49 years old and having won many races, the Super Mod was in exceptional condition. The sail, however, was not original but was new and made by Phuket sailmaker ‘Local Sails by Ket’.

While the Super Mod was fascinating, it was another boat that was the star attraction and my main reason to attend.

Vega 2 is an OK Dinghy, one of four OKs built by His Majesty the King. The first, Navaruek, was built in 1965, and then there was Vega. After building Vega 2 His Majesty renamed Vega to Vega 1. His Majesty sailed Vega from Hua Hin to Sattahip in 1966 – a trip of approximately 60 nautical miles which took 14 hours. His Majesty presented the rudder of Vega 1 as a trophy – the Vega Rudder Trophy – which is still competed for today, but this was not before HRH Princess Ubol Ratana raced Vega 1 against His Majesty the King in the 4th Southeast Asian Peninsular Games (now the SEA Games) in 1967.

Not only was it unusual for a father and daughter to compete in an international competition such as this, it was even more unusual that they tied on points, both winners, and were both awarded gold medals. The medals were awarded by Her Majesty the Queen.

Plenty has been written about that historic achievement, but many forget that the two winning boats were built by His Majesty. Vega 1 is today kept at Klai Kangwon Palace in Hua Hin while Vega 2 is kept at Tha Wasukri in Bangkok.

The boat on display at the fair was Vega 2 and it is in immaculate condition – at 50 years old she is aging gracefully and still has the original sail. Talking with its Thai guardian, he explained the provenance in detail and what was most surprising was that this was the first time in over 20 years Vega 2 has been displayed to the public. Vega 2 was never sailed after that gold-medal winning feat in 1967, and following a trip to Chiang Mai and subsequently Phuket more than 20 year ago, Vega 2 has been kept behind closed doors ever since.

It was a true privilege to view this boat. The craftsmanship alone is impressive, but the pedigree and history is unmatched, I hazard a guess, anywhere in the world. Following Vega 2, His Majesty built his fourth and last OK dinghy and named her Vega 3, later changing the name to Awake because the King liked to work late, and, more recently, to New.

If you ever get the chance, take a look at the sail numbers on His Majesty’s boats. Back when he built boats, all Thai sail numbers had TH as the prefix – two letters. Today it is THA. The numbers always add up to 9 – TH 18 (Vega 1), TH 27 (Vega 2). His Majesty King Bhumibol Adulyadej, also known as Rama IX, is the ninth monarch of the Chakri Dynasty.

Looking Back: Two brothers contend for the throne

Keep It Green: The cost of cutting trees