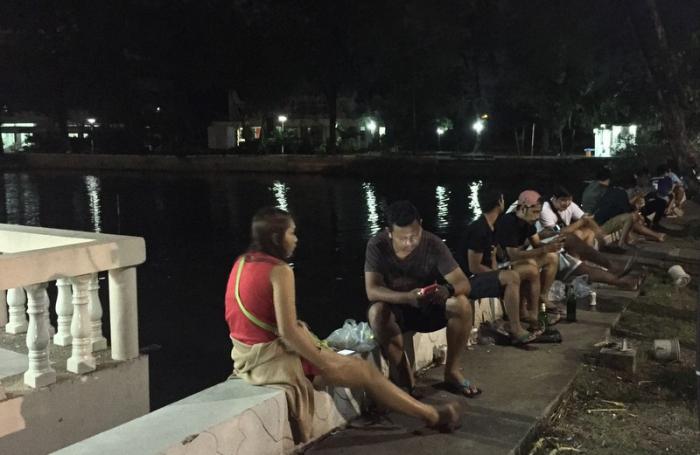 PHUKET: Local vendors at popular Pokemon catching spots in Phuket have experienced a boost in income since the launch of Pokemon GO in Thailand. However, some vendors expect this spike to be short lived.

For those who are wondering what Pokemon GO is, it is Nintendo Company’s mobile phone game which marries a classic 20-year-old franchise with augmented reality, and has become an instant hit globally. Players walk around real-life places to search out and capture Pokemon cartoon characters on their smartphones.

There are two major spots where people gather to catch Pokemon in Phuket – Rang Hill and Saphan Hin.

The popularity of the game has so far been helpful for businesses in the area. A vendor at the bottom of Rang Hill, who wishes to be named only as Ms Pen, says the area has become crowded ever since the game’s launch in Thailand.

“I sell steamed buns (salabao), soy milk, and other drinks. It is usually very quiet down here at the bottom of the hill. It used to be a shrine with hardly any visitors appearing. I used to come here to sell sometimes,” she says.

“Ever since the game was launched, many people gather here to play. The area becomes even more crowded in the evenings, from about 8pm until late at night. There are a lot of teenagers who come on bikes and then stand there catching Pokemons.”

Ms Pen says her sales have increased a little, but not steeply.

“I am able to sell more snacks and drinks, but it is not a huge increase, as most people are there to play, not to eat. I still go out there to sell food every night, except on rainy days,” she says. “I need to cash in on this trend and earn quickly from it because I believe people will soon get bored of it and not come here for the Pokemons anymore. You know how Thai people are,” she added.

A hawker at Saphan Hin, where many Pokemon GO players gather near the circle and the water, expressed similar views about the trend.

“A lot of people, especially teenagers, used to come to Saphan Hin, even before the game was launched. Now we see even more teenagers, as well as a lot more middle-aged people. It is very funny for me to see middle aged working people coming here to catch Pokemons,” said Ms Kiew, a fruit seller in the area.

“I have made a little more income from this, but I am not really surprised or happy about it. I am certain it won’t last long, but I am happy to see more people coming here and making it more lively. I don’t mind as long as it helps local vendors make more money, whether a little or a lot,” she added.