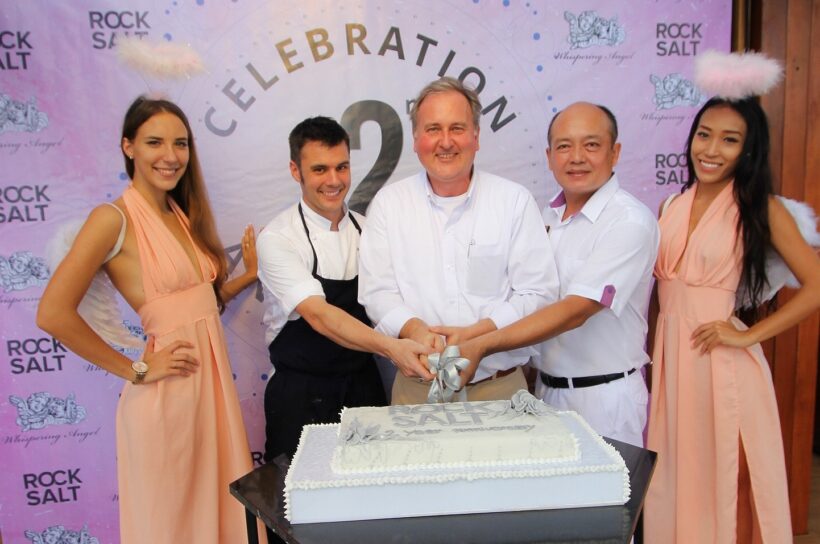 The team at Phuket’s only member of Leading Hotels of the World celebrated the occasion with a Whispering Angel Rosé Party during which guests were served a welcome glass of wine from a 3 litre double magnum of Garrus 2015 – named Best Rosé in the World by celebrity wine critic James Suckling.

“Two years has flown past since we opened Rock Salt and it is now a well established and much loved beachside dining destination on Phuket,” said Frank Grassmann, General Manager of The Nai Harn.

“This anniversary comes at an exciting time for us with the recent appointment of our new Chef de Cuisine, David Attwater, who will introduce some fabullus new dishes at Rock Salt using fresh local and imported ingredients.”

Gourmet bites were passed around on the night to showcase some of the most popular menu items served at Rock Salt over the last two years. The chef also prepared a special birthday cake with everyone served a slice to enjoy as part of the popular ocean view restaurant’s milestone celebration.

Models dressed as angels handed out special rosé jellies and posed for photos while The Nai Harn’s resident DJ Lebree played chilled tunes to go with the chilled wine.

The fun was fueled with free-flow Whispering Angel rosé wine available for just 1,990 baht per person from 5 – 8 pm. This attractive offer will continue at Rock Salt as part of a new weekly party called “Whispering Saturday”.

Find out more or book a table at Rock Salt HERE.