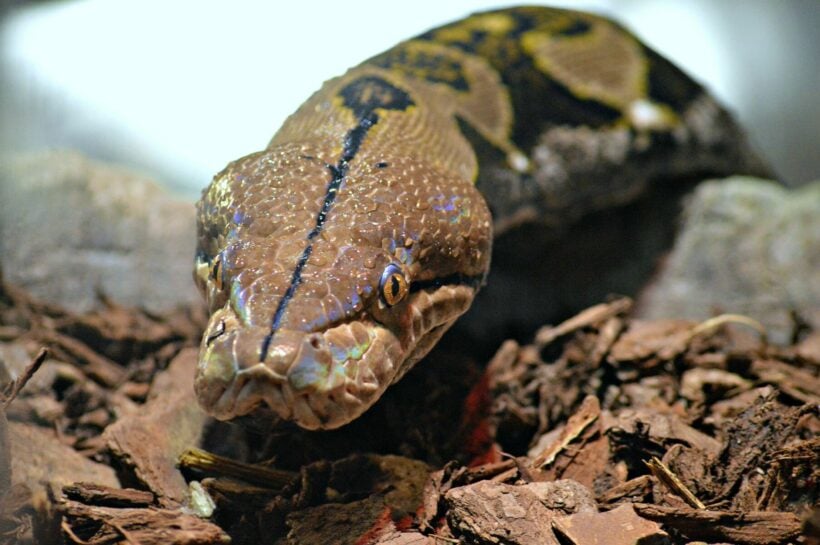 Yesterday, a dream (nightmare) came true for a Pattaya man when he found a python that weighed 30 kilograms in his garage.

At 1 am rescue were workers were dispatched to the man’s garage, a second-hand car shop/house in Nongprue. The rescue workers and local media got to the scene to find a 4 metre (or 13 feet/about 2 Michael Jordans) python. It reportedly took only 15 minutes to capture the python by snake handlers who wrangled the reptile.

The owner of the house, 63 year old Suchart Suwachart, told local media that he heard his dog barking aggressively in the garage where it sleeps. Suchart says he was relaxing inside the house at the time but went to the garage to see what the fuss was about. He then saw a sizeable restrictor in his garage. He addmited capturing the snake was “out of my league” so he promptly called rescue workers to remove the animal (the snake, not his dog).

The snake handlers reassured local media that the snake wasn’t harmed and they will release it somewhere in an “uninhabited forest” in Chon Buri.

Suchart did not mention how he thinks the snake got into the garage or whether his dog still has to sleep in the garage after the appearance of its nighttime visitor.

Earlier this month, a house in the northern Thai province of Phitsanulok found 45 empty python eggs under its house.

AussieBob
Glad his dog didnt get too close while barking at it.
Bangkok_Gary
The man "saw a sizeable restrictor in his garage." Restrictor ?? Um... Constrictor perhaps ?

JamesE
10 minutes ago, Bangkok_Gary said: The man "saw a sizeable restrictor in his garage." Restrictor ?? Um... Constrictor perhaps ? Dunno. If I saw that I'd be restricted from going into the garage.