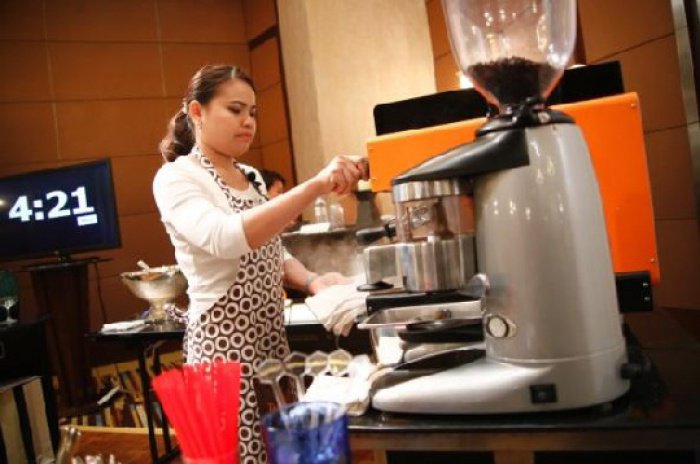 PHUKET: Even before the world was full of middle-class yuppies, coffee was a big deal to those in the know. Now, everyone is part of the in-crowd, and even those wanting just a simple cup of coffee are asking their barista for an Americano.

For those who aren’t in the know, a barista is to coffee what a sommelier is to wine and a soda jerk is to cola. They are the ones who ensure that your cappuccino gets an equal part of that familiar morning trinity of espresso, milk and foam.

Now, just leave it to the Americans to follow the Japanese and let something as normal as coffee get weird

with bikini baristas, which is a person who prepares and serves coffee drinks while dressed in scanty attire, at least according to Wikipedia (where else do you confirm such a strange fact?).

This marketing trend of banking in on “sexpresso” shops started in Japan in the 1980s and spread to the US in the early noughties. However, nearly 14 years later in Phuket – the capital of terrible sex puns – we are still keeping it classy when it comes to coffee and our baristas.

Such coffee class rose to the milky surface on December 15, when Chalalai Saenkhan – Food & Beverage Captain from Hilton Phuket Arcadia Resort & Spa – took home the Thailand Barista Cup. After having beaten out five competitors on the island she was able to advance to the nationwide level and put seven other of Hilton’s finest in the Kingdom to shame.

The Hilton competition, unlike other barista comps, is split into a written product knowledge test and a preparation test.

During the preparation test, Ms Chalalai had to make an espresso, a cappuccino and a “freestyle specialty coffee” – no alcohol allowed.

And when it came down to it, it was her award-winning Lychee Tower caffeine creation that made the difference.

“We are immensely proud and happy for Chalalai. Throughout the entire preparation period she was constantly trying to improve her signature coffee, seeking the opinions of others and feedback from the judges,” a Hilton representative told the Phuket Gazette.

“She is extremely service oriented with a beautiful smile, and winning this competition is a testament to her hard work. We had no doubt Khun Chalalai would make us proud and represent Hilton Phuket Arcadia Resort & Spa with great enthusiasm.

“This was also a good experience for her as she was able to view, taste, and discover new flavors and coffee-making techniques, which will surely challenge her to come back and create even more exciting coffees.”

Now, Chalalai will face top Hilton baristas from other countries in the region, such as Singapore, Malaysia, Vietnam, The Maldives, Sri Lanka and Indonesia.

But let’s not get ahead of ourselves: a competitive barista’s skills aren’t something solely appreciated and judged by the Hilton and their guests; there is also the World Barista Championship (WBC), which started in 2000.

Even if you aren’t in desperate need of 12 top-notch coffees, that Lychee Tower definitely sounds tempting.