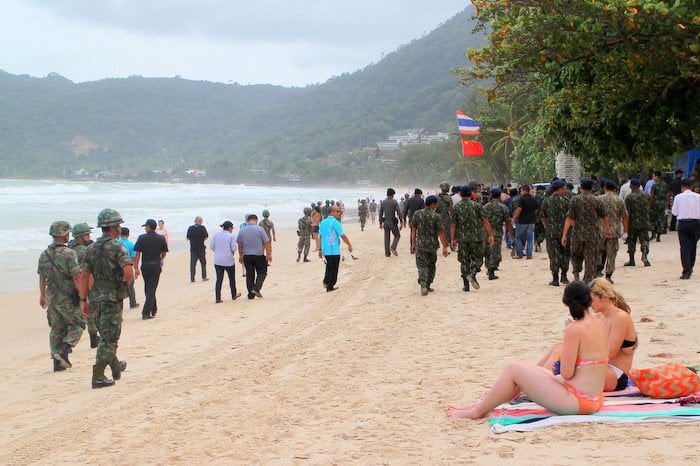 With 2014 behind us, it is time to reflect on 12 months – that is 365 days, or 8,765 hours – of news that transformed Phuket and deeply affected how the island is perceived by the outside world. Here, the Phuket Gazette‘s Somchai Huasaikul looks through our archives at the game-changing moments of 2014.

PHUKET: The year that was 2014 started out like many that preceded it, with continued expansion of the island’s tourism industry, despite continuing complaints about Phuket’s tuk-tuk mafia, jet-ski scammers, growing environmental concerns and fears surrounding tourist safety in general.

At the start of the year, Phuket Provincial Hall was the site for near-daily street protests led by the People’s Democratic Reform Committee (PDRC). Aimed at forcing Prime Minister Yingluck Shinawatra to step down so that Thailand could somehow be “restarted” as a corruption-free realm under a new Constitution, the PDRC claimed an appointed ruling board would run the country until all the necessary changes were carried out, and Thai politics was rid of the influence of the Shinawatra clan once and for all.

The government’s Center for the Administration of Peace and Order (CAPO) helped maintain some semblance of order during “Bangkok Shutdown” street protests on January 13, and related protests in other parts of the country, but the political climate intensified nationally – including in Phuket – as the February 2 snap election called by PM Yingluck approached.

With the Yellow Shirt-aligned Democrat Party refusing to take part in the polls and voting at numerous polling stations in Bangkok, Phuket and other parts of the south disrupted by PDRC protests, the Election Commission annulled the results, recommending that a new poll take place in May.

But on May 7, Ms Yingluck and several other ministers were ordered out of office following a ruling by the Constitutional Court over the controversial transfer of a senior official in 2011.

Fears of Red Shirt riots like the bloody clashes in Bangkok in March 2010, led the Army to declare martial law on May 20. Two days later, the National Council for Peace and Order (NCPO) seized power and coup leader Gen Prayut Chan-o-cha was named as acting prime minister.

The reality of yet another military coup struck some observers in the same way Dorothy must have felt when she suddenly re-awakened, after her spinning house crashed down with a thud in the Land of Oz. The initial reaction in the Phuket tourism industry was fear that the takeover would be like the 2006 coup that preceded it: a public relations blow sure to cause a plummet in arrival figures, but with no real benefit for Phuket tourism.

But, like Dorothy opening the door to a colorful Munchkinland, it did not take too long for the NCPO to convince observers that Phuket’s systemic corruption was to be a primary target in its goal of “Returning Happiness to the People”. In terms of timing, the takeover probably could not have come at a better time for Phuket: the onset of the low-season for tourism.

One of the NCPO’s first orders business was Phuket’s notorious transport syndicates. On June 4, the military carried out an offensive that saw an initial batch of 70 illegal taxi operators arrested, with at least 108 people eventually charged for involvement, including Karon Mayor Tawee Thongcham.

In late August, the raids extended to Patong, where the late former Mayor Pian Keesin and two of his sons were among 82 suspects arrested on charges of extortion and collusion.

The former mayor, who narrowly survived the tsunami and barely avoided driving into a sinkhole on Patong Hill Road (aka Mt Mayhem) in 2009, will never face trial for the charges against him: he died unexpectedly in the bathroom at his secondary home near Phuket Town in early October.

After tackling the taxi mafia, the NCPO turned its full attention to its “Blissful Beach” campaign to rid the island’s strands of illegal encroachment in all their forms.

On June 12, more than 100 businesses operating along the beachfronts at Surin, Bang Tao, Laypang and

Layan beaches were ordered to remove their structures or face having them demolished. Many popular beach clubs were part of the ongoing offensive, which also extended into the Sirinath Marine National Park.

Images released in early June of the “new” Surin Beach free of all illegal construction, went viral on social media in June, further cementing public opinion that – issues of democratic development aside – the NCPO was at least taking long-overdue action to address some of the island’s most entrenched problems.

While most of the changes were seen as shaping things for the better, the complete ban on parasols made headlines with the arrival of the high season, when a group of Swedish tourists were forced to remove the beach umbrella they had brought to the beach themselves, to protect their fair-skinned children from the sun’s deadly rays.

It was becoming apparent that the complete parasol ban may have been a case of “throwing out the baby with the bathwater”, so as the high-season progressed, the Navy decided to ease the restrictions somewhat and allow tourists to “BYOP” (bring your own parasol).

Perhaps the most surprising turn in the Blissful Beach campaign came in late September, when Police Region 8 authorized summonses for 15 people, again, including Karon Mayor Tawee, for illegally issuing permits for local beach vendors to use public beach land.

Under the illegal scheme, which had been going on for decades, income from divvying up beach land for rent to private vendors easily exceeded 1 billion baht annually at both Kata and Karon beaches, it was revealed.

Despite the overall transformation of the beaches for the better, the reviled jet-ski rental and parasail businesses somehow managed to survive, albeit with yet another set of “new rules” to regulate them, including new zoning measures and a “three strikes and you are out” policy for violators.

Under the new rules, jet-skis and parasol speedboats could continue to operate outside swimming zones, but

would supposedly not be allowed directly onto the beach itself.

Despite the changes, the industry took yet another blow to its safety reputation in late October, when a tourist survived being run over by a jet-ski-towing vehicle in Kata.

A few days later, a Russian tourist died from head injuries while operating a rented jet-ski in Patong. Then, in December, another Russian tourist survived multiple deep gashes to his leg when hit by the propeller of a parasail boat in Kata.

As 2015 gets underway, it will be interesting to see if the Phuket Marine Police, which is responsible for marine safety issues along the island’s coast, continues its support for the controversial jet-ski and parasail industries that are the source of so many complaints, injuries and deaths.