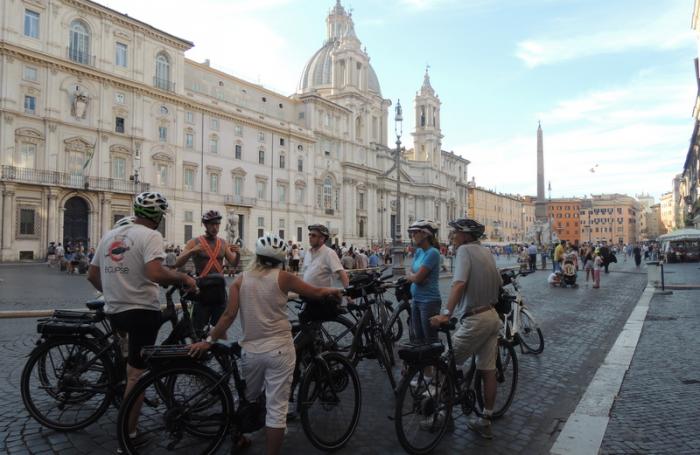 PHUKET: Like many cycling enthusiasts, I have long held a prejudice against electric bicycles. Somehow the whole idea of adding a motor of any kind into the primal equation of man, muscle and machine seemed just plain wrong and indeed a bit akin to cheating. Surely the whole concept of the bicycle is of a wonderful enhancement of man’s ability to move about under his own power and not a means of usurping that power through the addition of outside sources of propulsion. Or so I thought.

I recently had an experience that turned my prejudice against e-bikes on its head.

I was in Rome a few weeks ago and wanted to take another look at the fabulous historical, cultural and architectural abundance of that perplexing city. Rome’s key architectural treasures are, of course, well spread out, often hidden within and under the fabric of today’s dirty, clamorous and traffic-choked city.

In addition, it was hot and polluted and Rome’s drivers are not known for their tolerance and kindness towards cyclists.

We had decided to book a guided bike tour with Top Bike Rentals (topbikerental.com) and they suggested an e-bike option as a means of coping with hills, heat and horrendous traffic. Having enjoyed a sumptuous pasta lunch, accompanied by a couple of glasses of vino at a restaurant overlooking the Colosseum, we thought ‘why not?’ And so began my first e-bike experience.

Electric bicycles, also known as booster bikes, are bicycles with an integrated electric motor, which can be used for propulsion. There are a great variety of e-bikes available, from those that only have a small motor to assist the rider’s pedal-power (pedelecs), to somewhat more powerful e-bikes which are closer to moped-style functionality.

All however retain the ability to be pedaled by the rider and are therefore not electric motorcycles. E-bikes use rechargeable batteries, and the lighter varieties can travel up to 30km per hour, depending on the laws of the country in which they are sold, while the more high-powered varieties can often go in excess of 45km per hour.

Depending on local laws, as is the case in Italy, many pedelecs are legally classified as bicycles rather than mopeds or motorcycles, so they are not subject to the more stringent laws regarding their operation.

In Rome they can enter areas from which normal vehicular traffic is excluded. This works out great, as it means that as a cyclist, you get a chance to be up close and personal with many of the fabulous ancient treasures and hidden spots.

We spent almost seven hours exploring the beauty of the Eternal City and the e-bikes proved to be liberating, freeing us up to enjoy the visual bounty all around. In addition, they easily conquered Rome’s many hills, defying the heat, and were handy when needing acceleration to escape traffic snarls and the abundant crazy drivers around us.

From the Colosseum to the top of Fagutal Hill, passing by the Imperial Forums and many more of Rome’s breathtaking ancient spots and hidden treasures, we cycled through small alleys with amazing Renaissance and Baroque palaces and churches, then across hidden squares with their monumental fountains guided by our intrepid local guide.

I had the revelation that e-bikes, in the right location and circumstances, most certainly have their place in the cycling Pantheon.

In fact, it struck me that such guided e-bike trips around Phuket would be a major tourist draw for our island.

Looking back: Crisis at the Front Palace