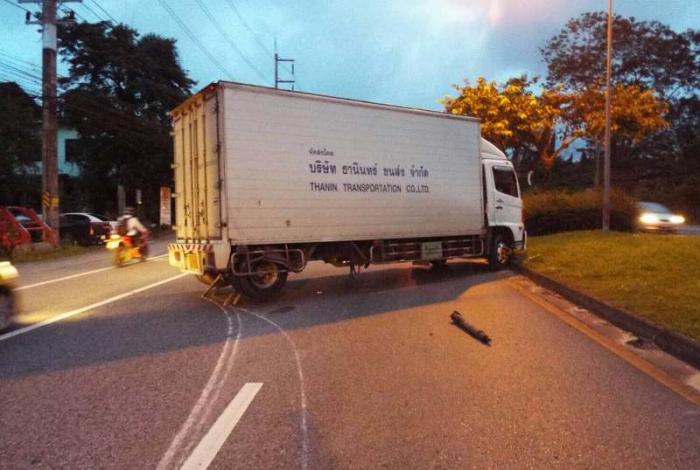 PHUKET: An intoxicated American man was arrested for throwing bottles at vehicles and running in and out of traffic on the northbound Thepkrasattri Road in the early hours of yesterday morning.

Mr Leonard allegedly smashed the window of a passing pick-up truck and caused a six-wheel truck to lose control and crash into the curb, blocking northbound traffic along the major thoroughfare.

“At about 5:30am, we received a report of a drunk foreigner running around, smashing vehicle windows in Mai Khao on Thepkrasattri Road, northbound,” Capt Thanom Thongpan of Tah Chat Chai Police said.

“He was also cutting in front of vehicles and causing trouble to northbound drivers who were trying not to hit him,” he said.

When police arrived on the scene, Mr Leonard had reportedly been restrained by locals in order to prevent him from causing further damage.

Police found a container truck at the scene, unable to move after crashing into the roadside. Standing by the truck was the driver, Wallop Thongket, who had been on his way back to Surat Thani after delivering products to 7-Eleven stores in Phuket Town.

“I had just completed my delivery and was heading back when a foreigner came out of nowhere and jumped in front of my truck,” Mr Wallop said. “I braked hard and hit the median.”

A pick-up truck with a smashed left window was pulled over near Mr Wallop’s six-wheel truck. That driver, Sakkarin Sa-ad, told police he was on his way to Chonburi from Phuket Town, a 13 hour drive, when he encountered Mr Leonard.

“He just jumped up and smashed my window,” Mr Sakkarin said. “I saw him smash another van’s window with a bottle too. But, I guess the guy was in a hurry because he didn’t pull over or anything.”

Capt Thanom told the Phuket Gazette that Mr Leonard has signed a compensation agreement which obligates him to cover the cost of the damage to the vehicles he attacked.