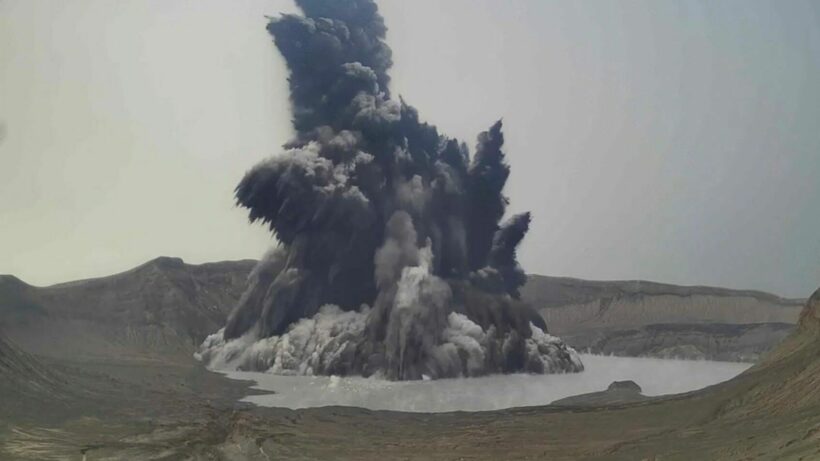 One of the world’s smallest active volcanoes, the Taal Volcano in the Philippines, is forcing tens of thousands of residents to evacuate after it started blasting out a kilometre high plume of gas and steam yesterday.

The alert went out that that the volcano, which is 70 kilometres south of Manila, had jumped from level 2 to level 3 which indicates that “magmatic intrusion at the main crater that may further drive succeeding eruptions” says Phivolcs chief Renato Solidum.

Despite its diminutive natured (311 metres tall), the Tall Volcano has a bit of a Napoleon Complex. In 1911 its eruption killed over 1,300 people.

People were evacuated from Agoncillo in the later afternoon, says Batangas provincial governor Hermilando Mandanas. Almost 15,000 people had to be moved to safer areas. Dump trucks and payloaders were also sent in to help. Evacuation centres were prepped, added Hermilando.

Last January, Taal had another outburst when it ejected a pillar of ash and steam 15 kilometres straight into the sky. This forced 100,000 people to evacuate their homes and inconvenienced many flights as heavy ash fell on Manila.

The situation is precarious with authorities warning it could “go either way”. However, the eruption could prove to be more hazardous than last year’s.

Renato reiterated the dangers of the rupture in the crust:

“The public is reminded that the entire volcano island is a Permanent Danger Zone (PDZ), and entry into the island, as well as high-risk villages of Agoncillo and Laurel is prohibited”.

Meanwhile, President Rodrigo Duterte made light of the situation saying maybe he would put a cap on the crater, and that he did not see some of his workers so maybe they fell into the crater. Pressed for how seriously the matter should be taken, he added:

“But it’s not really a grave concern for us at this time. Maybe it will degenerate into something bad. By that time, we will know”. He also expressed his unfamiliarity with the topic while continuing to add his thoughts:

“Now, it’s just a rumbling and it’s spewing, I don’t know if it’s really the ashes”.

2 dead and 20 missing in Japanese landslide, rescuers continue to search for survivors