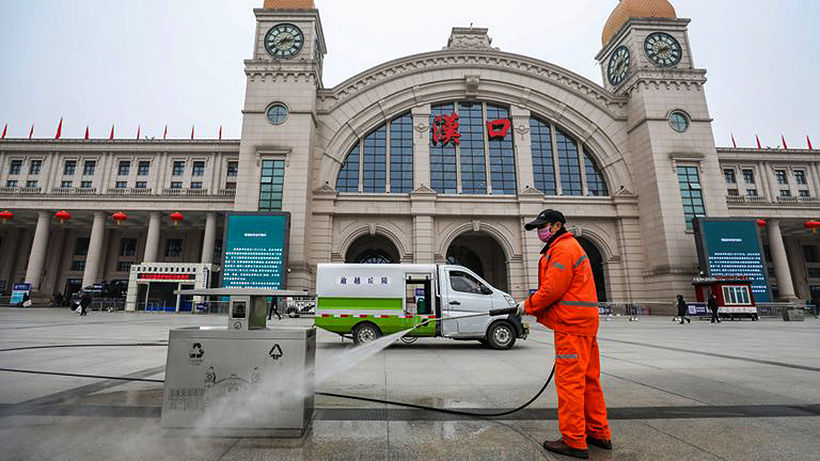 PHOTO: Chinese workers washing down the entrances to the deserted railways stations in Wuhan - Sky News

The World Health Organisation has labelled the Novel Coronavirus “an emergency in China” but hasn’t declared the situation as an international epidemic at this stage. 634 cases have now been confirmed in China with health officials confirming the first death outside of Wuhan, whilst seven other countries have reported non-fatal cases. 18 people are now confirmed dead as a result of the virus, many who had underlying health issues before contracting the virus.

The World Health Organisation chief Tedros Ghebreyesus says that whilst the few known cases outside China remain under control, the WHO are warning that the pandemic could spread.

“It has not yet become a global health emergency. It may yet become one.”

Meanwhile the main cities of the Hubei province in central China have locked down transport in and out. Wuhan, a city of 11 million people, and the epicentre of the new virus, has suspended transport, including outgoing flights while residents were ordered not to leave. The neighbouring city of Huanggang, with 7 million residents, has also gone into a transportation lockdown.

Railways stations are now all but deserted, highway toll booths are now closed, effectively sealing road exits, and public transport and ride-hailing services are now cancelled. Guards are patrolling the city’s highways to prevent residents from sneaking out of the city.

Wuhan’s residents are packing hospitals and clinics for medical checks, stripping supermarkets of supplies and queuing for petrol as panic of the isolation sets in. But the transport of goods and general trade in and out of the cities is still going ahead, under supervision.

The new virus, currently described as the Novel Coronavirus, is still under intense scrutiny as multiple strands of the world health community scramble to get a better understanding of the virus. It is thought have emerged during December 2019 from illegally traded wildlife at a popular animal market in Wuhan. That market has since been closed down and cordoned off. At this stage there is no vaccine for the virus, and its mode of transmission is not fully understood. Symptoms of the Novel Coronavirus include fever, coughing and difficulty breathing. It is also unknown how easily it spreads human-to-human.

Almost three-quarters of the cases are people aged 40+, and 40% already had some underlying health issues. At this stage there had been human-to-human transmission of the virus within China but limited to family groups and health workers.

Cases have been reported in Thailand, Vietnam, Singapore, Japan, South Korea, Taiwan and the US but authorities in those countries say the cases have been quarantined and treated. Meanwhile the BBC reports that 5 people are being tested for the virus in Scotland. All reported respiratory symptoms and recently returned from Wuhan.