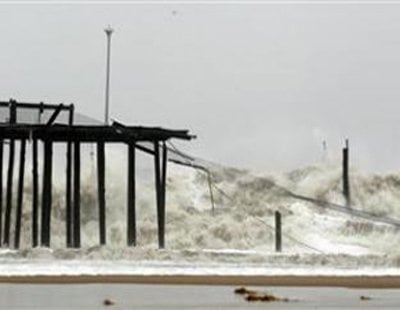 
Massive storm Sandy crashes ashore in New Jersey
PHUKET: Sandy, one of the biggest storms ever to hit the United States, roared ashore with fierce winds and heavy rain earlier this morning (Phuket time) near the gambling resort of Atlantic City, New Jersey, after forcing evacuations, shutting down transportation and interrupting the presidential campaign.
High winds and flooding racked hundreds of miles of Atlantic coastline while heavy snow was forecast farther inland at higher elevations as the centre of the storm marched westward.

More than 3 million customers have already been left without power and more than a million people were subject to evacuation orders. Many communities were swamped by flood waters.

The National Hurricane Centre said Sandy came ashore as a “post-tropical cyclone,” meaning it still packed hurricane-force winds but lost the characteristics of a tropical storm. It had sustained winds of 80 miles per hour (129 kph), well above the threshold for hurricane intensity.

Trees were downed across the region, untethered pieces of scaffolding rolled down the ghostly streets of New York City, falling debris closed a major bridge in Boston and floodwater inundated side streets in the resort town of Dewey Beach, Delaware, leaving just the tops of mailboxes in view.

In Fairfield, a Connecticut coastal town and major commuter point into Manhattan, police cruisers blocked the main road leading to the beaches and yellow police tape cordoned off side entrances. Beach pavilions were boarded up with plywood, and gusts of wind rocked parked cars.

“People are definitely not taking this seriously enough,” police officer Tiffany Barrett, 38, said. “Our worst fear is something like Katrina and we can’t get to people.”

U.S. stock markets were closed for the first time since the attacks of September 11, 2001, and will remain shut. The federal government in Washington was closed and schools were shut up and down the East Coast.

Governors up and down the East Coast declared states of emergency. Maryland’s Martin O’Malley warned there was no question Sandy would kill people in its way.

New York electric utility Con Edison said it expected “record-size outages,” with nearly 35,000 customers in lower Manhattan and Brooklyn likely to be impacted. The company is facing both falling trees knocking down power lines from above and flood waters swamping underground systems from below.

“In the olden days, you would have had lots of fatalities. We’re not through this yet… It may be as bad a storm as we’ve ever seen, but I would expect the damage to be relatively minor,” New York City Mayor Michael Bloomberg told an evening news conference last night (Phuket time).

New York City evacuated neighbours of a 90-story super luxury apartment building under construction after its crane partially collapsed in high winds, prompting fears the entire rig could crash to the ground.

Meteorologists say Sandy is a rare, hybrid “super storm” created by an Arctic jet stream wrapping itself around a tropical storm.

The combination of those two storms would have been bad enough, but meteorologists said there was a third storm at play – a system coming down from Canada that would effectively trap the hurricane-nor’easter combo and hold it in place.

While Sandy does not have the intensity of Hurricane Katrina, which devastated New Orleans in 2005, it has been gathering strength. It killed 66 people in the Caribbean last week before pounding U.S. coastal areas as it moved north.

An AccuWeather meteorologist said Sandy “is unfolding as the Northeast’s Katrina,” and others said Sandy could be the largest storm to hit the mainland in U.S. history.

PRESIDENTIAL CAMPAIGN INTERRUPTED
The storm interrupted the U.S. presidential campaign with eight days to go before the election, as President Barack Obama and Republican challenger Mitt Romney cancelled events. Both men acted cautiously to avoid coming across as overtly political while millions of people are imperilled by the storm.

As runways, roads, bridges and tunnels were progressively shut down by the storm yesterday, it became difficult if not impossible to get from Washington to New York City along what is normally one of the most heavily travelled corridors in the United States.

Several feet of water flooded streets in Rehoboth Beach, Delaware. Police knocked on doors, reminding people there was a mandatory evacuation. While the police took names, they allowed residents to stay at their own risk.

Off North Carolina, the U.S. Coast Guard rescued 14 of the 16 crew members who abandoned the replica tall ship HMS Bounty, using helicopters to lift them from life rafts. The Coast Guard later recovered the body of an “unresponsive” 42-year-old woman while continuing to search for the 63-year-old captain of the ship, which sank in 18-foot (5.5 meters) seas.

Besides rain, the storms could cause up to 3 feet (1 meter) of snowfall in the Appalachian Mountains from West Virginia to Kentucky. Some people in that part of the country did not have to go to work because of the storm and used the time to vote.

At the Berkeley County Courthouse in Martinsburg, West Virginia, early voting for the November 6 elections was going ahead despite the bad weather, with hundreds of people casting ballots.

“More (people) came out today than what I anticipated but a lot of people are off work,” Bonnie Woodfall, chief deputy for voter registration, said after fielding a flurry of calls about whether the polls should stay open. “It’s neat.”

On the small New York island neighbourhood of City Island, which juts into Long Island Sound east of the Bronx, many residents were ignoring a mandatory evacuation order. The narrow island, known for its seafood joints and maritime-themed antique shops, is home to an isolated, working-class community of New Yorkers who say they’re used to big storms and flooding.

U.S. Election campaign heats up in eye of the storm