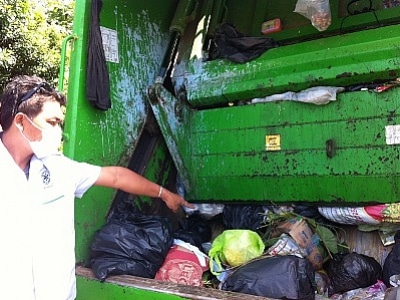 PHUKET: The body of a newborn boy was found wrapped in a plastic garbage bag in the back of a Krabi trash truck this morning.

Police believe the baby was discarded by his mother shortly after birth, just hours before the body was found.

“The baby seemed to have fully developed organs. It was found along with the placenta,” said Lt Col Napadol Mukda of Krabi City Police.

Trash collector Somjit Kramol, 38, was standing at the back of the truck and had just started to compress the trash when he noticed the baby’s body.

“I saw the body. It was shocking,” said Mr Somjit.

Police suspect that the mother was either a woman not ready to raise the child or a prostitute who had accidentally become pregnant.

“That would explain why the baby was abandoned and left in a trash bag at night,” said Col Napadol

The body was taken to Krabi Hospital, he added.

Police plan to investigate the truck’s route, and check hospital records and clinics in the Sai Thai area for information that might lead to the arrest of the mother.

“We will search for the mother and uphold the law,” Col Napadol said.

In July this year, another recently born baby was found dead in a trash bag in Krabi’s popular tourist area of Ao Nang.

The news also follows a mother abandoning a healthy baby girl shortly after birth at Thalang Hospital in Phuket on October 19. The mother has since returned to nurse her newborn, but has yet to decide whether or not to keep the baby.