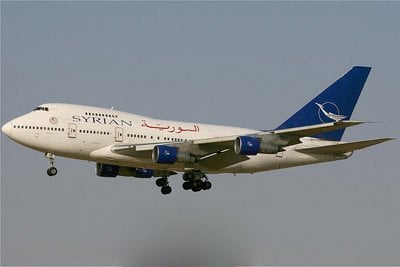 PHUKET: Passenger and cargo flights operated by Syrian airlines will no longer be allowed to land at airports in the European Union (EU) under new sanctions adopted Monday to further increase pressure on the regime of Syrian President Bashar al-Assad, officials said.

The Council of the European Union on Monday decided to slap 28 persons with links to the Syrian regime with a travel ban and an asset freeze, meaning they will not be allowed to enter the EU and any assets they have there will be frozen. Two entities were also hit with an asset freeze in the EU, but the names of both the entities and persons targeted were not released.

Monday’s sanctions only target Syrian Arab Airlines and do not target smaller airlines such as Cham Wings Airlines and Syrian Pearl Airlines, but neither fly to Europe. The sanctions add to previous measures which banned all cargo flights operated by Syrian carriers from EU airports.

In addition to banning Syrian passenger flights, the Council also prohibited the import into the EU of arms from Syria, or any EU involvement in the transport of Syrian arms. The Council further banned EU nationals and enterprises from supplying financial services to Syrian arms exports, including insurance and re-insurance.

Commenting on the 19th round of EU sanctions against the Syrian regime, EU foreign policy chief Catherine Ashton warned against further militarization of the conflict in Syria. “We call on all states to refrain from delivering arms to Syria and to follow the EU in stopping the supplies that fuel the fighting,” she said.

The crisis in Syria began as a pro-democracy protest movement in March 2011, similar to those across the Middle East and North Africa. The Syrian government violently cracked down on the protests, setting off an armed conflict between pro-Assad forces and anti-government forces.

The United Nations estimates that more than 30,000 people, mostly civilians, have been killed and more than 1.2 million have been displaced since the uprising against President al-Assad began 1.5 year ago.

The opposition believes the number of deaths has already surpassed 33,000.