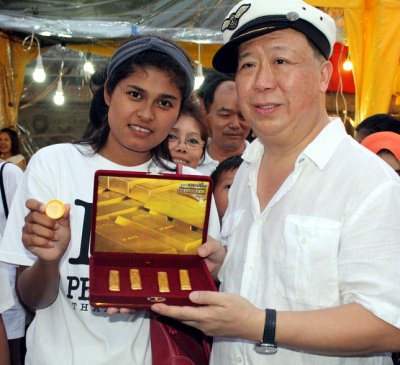 PHUKET: A student at Phuket Rajabhat University is the sixth lucky person to have won a million baht in the Ichitan drinks company’s lucky draw.

Ms Suparat bought her Ichitan drink and sent the company a text message noting the number on the inside of the bottle cap.

What Ms Suparat, originally from Trang province, did not know was that someone else had done the same and their number had been drawn. Unfortunately, they didn’t keep the cap as evidence and so were disqualified. Ms Suparat’s number was drawn next.

“Yesterday morning, Mr Tan called me personally to let me know I was the lucky one. I thought it was a joke,” Ms Suparat said.

“I sent a text to the number on the cap three times. I didn’t know I would be this lucky and I am really happy I won.

“This is my first year of dedicating myself to eating only vegetarian food during the Vegetarian Festival. My mother said that if I did this I would be lucky,” she added.

Ms Suparat revealed the money would be divided between the cost of her education and repairs to the family home for her mother.

Presenting the million baht in gold bars, Mr Tan said, “Suparat is the sixth lucky person in 60 days to win a million. We have drawn 11 lucky people so far, but there are 49 prizes left.”

Mr Tan acknowledged that the competition was good for business, reporting that sales were 20 to 30 per cent up on the same period last year.

On a more personal note, Mr Tan told everyone that it was an opportunity for him to attend the Vegetarian Festival in Phuket as well as present the prize.