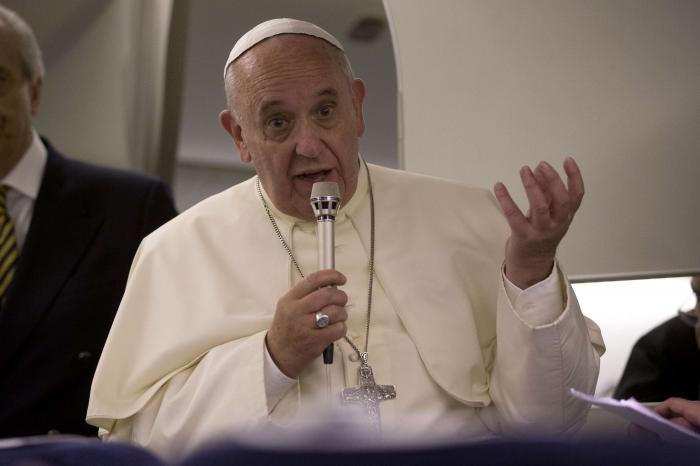 PHUKET: Pope Francis said on Monday that he will have his first meeting with a group of sex abuse victims at the Vatican early next month and said he would show zero tolerance for anyone in the Catholic Church who abused children, including bishops.

“Sexual abuse is such an ugly crime… because a priest who does this betrays the body of the Lord. It is like a satanic Mass,” he said in some of the toughest language he has used on a crisis that has rocked the Church for more than a decade. “We must go ahead with zero tolerance,” he said, adding that three bishops were currently under investigation.

Francis said he would meet with eight victims and Cardinal Sean Patrick O’Malley of Boston, who is head of a commission set up to study ways of dealing with the crisis.

Speaking to reporters for nearly an hour on the plane taking him back from a visit to the Middle East, the pope looked alert despite the gruelling three-day trip and overruled his spokesman who suggested the airborne news conference should be cut short to all him to rest.

The 77-year-old pontiff fielded questions on a range of topics, including Vatican finances, priestly celibacy, his concern for the environment, and whether he himself would one day retire like his predecessor Benedict XVI instead of serving for life. The concept of a “pope emeritus” could someday become normal in the Church, he said.

During his trip he invited Israeli President Shimon Peres and Palestinian President Mahmoud Abbas to the Vatican next month.

He said that the meeting would not be a mediation but a prayer meeting that he hoped could encourage the stalled peace process.

The pope also said he believes that Roman Catholic priests should be celibate but the rule was not an unchangeable dogma, and “the door is always open” to change. It was something he has said before his election but it was the first time he made the remark as pope.

Francis said the victims, several from Europe, would attend his morning Mass and then he would meet with them. It will be the first time for Francis to meet sexual abuse victims since his election in March 2013.

It was not clear, however, if the pope also meant zero tolerance for bishops who are not accused of being abusers themselves but who are accused of having turned a blind eye to abuse by priests in their dioceses or who may have covered up abuse scandals.

O’Malley said last month in Rome that the commission he heads will recommend that negligent clerics be held accountable regardless of their rank in the Church.

In many cases of abuse, most of which took place decades ago but surfaced in the past 15 years or so, bishops seeking to protect the Church’s reputation moved priests from parish to parish instead of defrocking them or handing them over to police.

Victims’ groups have pressed the Vatican to hold bishops who either shielded abusers or were negligent in protecting children to account, along with abusers themselves.

In February, the United Nations Committee on the Rights of the Child accused the Vatican of systematically turning a blind eye to decades of abuse and attempting to cover up sex crimes.

The Vatican called the report unfair and ideologically slanted.

Nigeria military says knows where girls are, rules out force

Ukrainians back Poroshenko to find way out of crisis