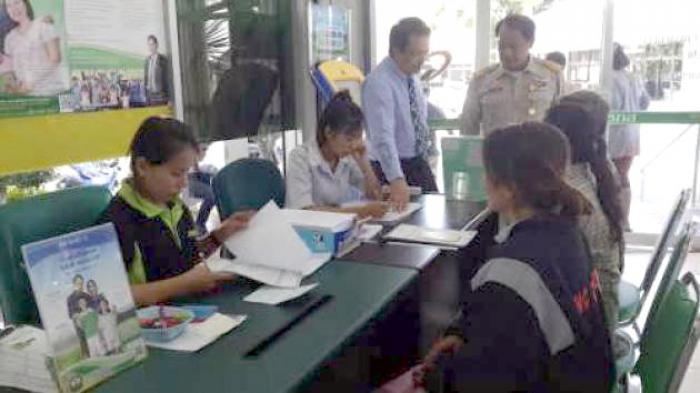 PHUKET: The Finance Ministry has invited 32 state and private banks to bid for the first phase of a three-year programme of bridge loans totalling Bt50 billion to pay rice farmers still owed under the pledging programme. The first Bt30-billion tender will be called early next month.

Pongpanu Svetarundra, deputy permanent secretary of the ministry, said those financial institutions interested in joining the bidding would be required to offer a minimum of Bt2 billion.

After former prime minister Yingluck Shinawatra dissolved the House of Representatives late last year and the government took on a caretaker role, which was prolonged by the failure to elect a new government in February, it was unable to raise the tens of billions of baht it owed farmers under the pledging project.

Accelerating these overdue payments to more than 800,000 farmers has been identified as a priority of the National Council for Peace and Order (NCPO), as the military junta now calls itself. It says it will try to clear the books within a month.

As it will take some time for the Finance Ministry to borrow the Bt50 billion under its latest tender offer, the Bank for Agriculture and Agricultural Cooperatives (BAAC) announced that it would ante up Bt40 billion to get some of the farmers paid in short order.

Luck Wajananawat, managing director of the BAAC, said this amount would come out of the bank’s own farmers’ relief fund.

“The bank believes that the remaining farmers will all be paid within a month,” he said.

Luck said that while waiting for the Bt50 billion to be borrowed by the Ministry of Finance, the BAAC would begin to disburse an amount not exceeding Bt40 billion so that the payments could start right away.

This operation would be guarantee by the ministry.

According to the BAAC, as of last Friday, of a total of 1.67 million contracts under the rice-pledging scheme worth Bt192.95 billion, the bank had paid off 833,182 contracts worth more than Bt100 billion.

Meanwhile, the Commerce Ministry’s permanent secretary Srirat Rastapana said it would set up a special task force, on which a representative from the NCPO would sit, to inspect rice stocks and warehouses nationwide.

A source in the Finance Ministry said its auditing committee had found that about 3 million tonnes of rice had disappeared from the stockpiles.

The junta’s decision to accelerate payment of farmers long owed money under the pledging programme could help stimulate the country’s economic growth to 3 per cent this year, says the Thai Chamber of Commerce.

After a meeting of the chamber’s regional boards in Bangkok yesterday, TCC vice chairman Somkiat Anuras said the Bt92 billion in payments to farmers would help boost confidence in the economy.

“The total payment of Bt92 billion that will be soon provided to farmers will boost economic growth by about Bt300 billion to Bt400 billion this year. As a result, the economy could grow by 3 per cent this year, higher the previous expectation of 1.5 per cent,” he said.

Somkiat said a survey of members during the weekend found that the business sector had more confidence in future growth, despite the impact on the economy due from a half-year of political turmoil.

To draw up plans for an economic road map, the chamber and the Board of Trade of Thailand are to hold a meeting of their members and seven other business organisations today. (May 27). The meeting’s conclusions will be proposed to the junta.

Somkiat said TCC members largely shared the view that cross-border trade would be a key economic driver this year amid uncertain overall export and tourism growth.

Asked about concerns about foreign investors’ confidence, Somkiat said this was the time to manage the mess the country found itself in. He expects that more confidence will be seen after Thailand solves its internal problems. He believes the NCPO will do this and reform the country in various aspects including politics, government, the economy and education.

According to the chamber’s survey, about 76 per cent of respondents had a gloomy economic outlook for this year because of the impact from political turmoil in the first half. However, most had a better outlook for future growth.

Viroj Jiratikanchote, chairman of the TCC’s committee on economic development of the Northern region, said the northern economy would see slow growth this year due mainly on the impact of the earthquake on the tourism sector. The tourism industry is expected to see this year’s revenue decline by Bt4.6 billion, or 4.6 per cent, from the previous forecast of Bt94.6 billion.