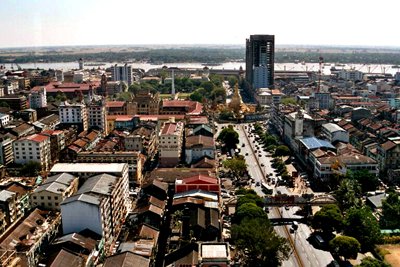 At least 15 people were killed on early yesterday morning when a fire caused a series of explosions at a government-owned warehouse in the former Myanmar (Burma) capital of Yangon, officials said. Dozens more were injured.

The fire broke out at around 2 a.m. Phuket time in Mingalataungnyunt township at a chemical storage warehouse which is part of the Ministry of Commerce, causing at least three large explosions as firefighters were attempting to get the fire under control. Police said at least 15 people were killed, including five firefighters, while 81 others were injured.

The fire quickly spread to nearby homes, causing them to collapse, according to Mizzima, a Burmese news organization in exile. Residents in the region told the news organization that the explosions were very loud and woke up many people.

The cause of the fire was not immediately known, but Myanmar has been hit by a series of bombings in recent years. On November 14, a total of 10 people were killed and 27 others were injured when a bomb exploded at an orphanage in Myitkyina, the capital of Kachin State. Several other bombs exploded in other parts of the city, causing no additional casualties.

Eight fishermen were reported missing on Tuesday after their fishing boat was hit by a strong storm off the western Indonesian coast of Sumatra, officials said on yesterday.

A group of sixteen fishermen had left on early Tuesday morning at around dawn to go fishing in the Pariaman waters, off the province of West Sumatra, when their boat was caught up in a strong storm.

Secretary of the Pariaman Natural Disaster Mitigation Body (BPBD), Kardinal, told the Antara news agency that eight of the fishermen were rescued safely, but the others remain missing.

Emergency personnel as well as local residents have continued their search efforts in the the Pariaman waters, as well as as in nearby islets where they were believed to have been stranded. However, high waves and harsh weather have further challenged the search and rescue operations.

Kardinal noted that the provincial administration had previously issued a warning that extreme weather would last until January 31, hoping that fishermen would take extra precaution when going out into the waters.

The flood of volcanic material hit several villages which are situated on the slopes of the volcano, which is located on the island of Ternate in the Maluku Islands, off the west coast of Halmahera. Provincial spokesman Andi Arief told the Jakarta Post that the floods destroyed several houses in Tubo and Tofure villages.

Andi said the flooding also hit the Togorara and Marikurubu rivers, destroying several houses along the riverbanks. “Initial data cited that three people died, while many other residents were evacuated to a school building and the former North Maluku governor’s office,” he added.

Mt. Gamalama last erupted on December 4, spewing ash up to 2,000 meters (6,560 feet) high and resulting in the evacuation of thousands of people living in the region. Tuesday’s flooding was the result of heavy rains which washed the volcanic debris down.

In addition to the fatalities, who were aged 50, 10 and 5, one person has been reported missing and is believed to have been killed. Two other people were being treated at Chasan Boesoerie hospital for various injuries.

As a result of the incident, the alert level at the volcano has been raised to level 3, the second highest. The country’s Volcanology and Geology Disaster Mitigation Center (PVMBG) uses a warning system with four levels of alerts, with level 1 being the lowest and level 4 being the highest.

Ternate is dominated by the volcanic Mount Gamalama (1715 m). The volcano erupts regularly, covering the island with volcanic dust. Major past eruptions of Gamalama include 1673, when a large, but undetermined number of people were killed, and 1772, when about twenty inhabitants died. The largest recent eruption of Gamalama was in September 1980, when 30,000 of the islands 56,000 residents were forced to temporarily flee to nearby Tidore.