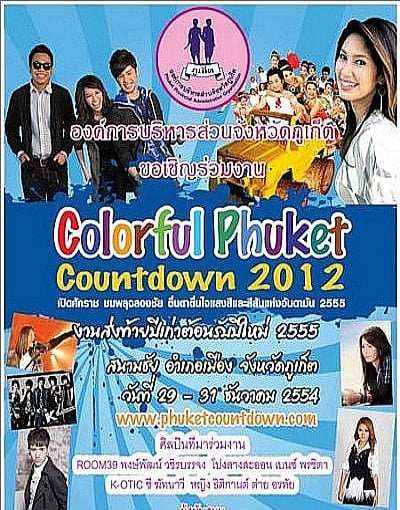 PHUKET: The holiday season kicks into high gear today with the opening of two important annual fairs in Phuket Town and the launch of police checkpoints all over the island as part of the nationwide “Seven Days of Danger” road safety campaign.

Phuket Governor Tri Augkaradacha is a busy man today, presiding over the openings of both the Phuket Red Cross Fair at Saphan Hin at 6pm and the Colorful Phuket Countdown 2012 event at Sanaam Chai, opposite Phuket Provincial Hall, at 8pm.

The opening of the Phuket Red Cross Fair will feature a fireworks display, followed by performances by nationally-renowned acts.

As in years past, the most anticipated event will be the charity raffle. This year one lucky person will be driving away the grand prize, a Honda City car.

Colorful Phuket Countdown 2012 will feature mini-concerts from many well-known artists, a dance contest, a 20-meter-long “under the sea” exhibition tunnel filled with lights and decorations, and much more.

A second countdown event will take place at Phromthep Cape in Rawai on New Year’s Eve, where a clock will be set up to count down the seconds until the last sunset of the year.