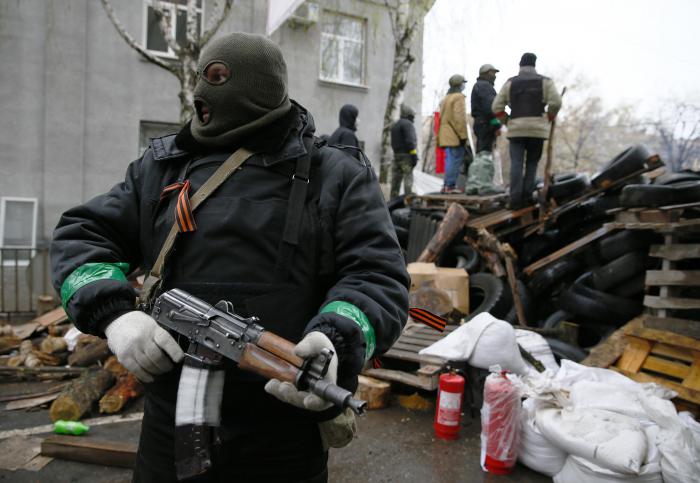 Angered by the death of a state security officer and the wounding of two of his comrades near the flashpoint eastern city of Slaviansk, Turchinov gave rebels occupying state buildings until Monday morning to lay down their weapons.

He blamed Russia, which opposed a pro-Europe uprising that forced Moscow-backed former president Viktor Yanukovich to flee, for being behind the rash of rebellions across Russian-speaking towns in eastern Ukraine.

“The blood of Ukrainian heroes has been shed in a war which the Russian Federation is waging against Ukraine,” he said in an address to the nation. “The aggressor has not stopped and is continuing to sow disorder in the east of the country.”

With East-West relations in crisis, NATO described the appearance in eastern Ukraine of men with specialised Russian weapons and identical uniforms without insignia – as previously worn by Moscow’s troops when they seized Crimea – as a “grave development”.

Though the Ukrainian military did not resist the Russian takeover of Crimea with force, Turchinov threatened robust action against the rebels in the east.

“The National Security and Defence Council has decided to launch a full-scale anti-terrorist operation involving the armed forces of Ukraine,” he declared.

Ukraine has repeatedly said the rebellions are inspired and directed by the Kremlin. But action to dislodge the armed militants risks tipping the stand-off into a new, dangerous phase as Moscow has warned it will protect the region’s Russian-speakers if they come under attack.

One Ukrainian state security officer was killed and five were wounded on the government side in Sunday’s operation in Slaviansk, interior minister Arsen Avakov said. “There were dead and wounded on both sides,” he wrote on his Facebook page.

The Russian news agency RIA reported that one pro-Moscow activist was killed in Slaviansk in clashes with forces loyal to the Kiev government. “On our side, another two were injured,” RIA quoted pro-Russian militant Nikolai Solntsev as adding.

Russian TV broadcast grainy footage of what it said was the body of the militant. The images, which Reuters could not verify independently, showed a man in black clothes, slumped against the door of a car, with a pool of blood between his legs. A rifle lay next to him.

The separatists are holed up in the local headquarters of the police and of the state security service, while others have erected road blocks around Slaviansk, which lies about 150 km (90 miles) from the Russian border.

However, details of the fighting remain sketchy. A statement from the administration of the eastern Donetsk region indicated the security officer may have been killed between Slaviansk and the nearby town of Artemivsk. Putting the number of wounded at nine, it said “an armed confrontation” was going on in the area.

An eyewitness in Slaviansk said a gunman walked up to a car in the city centre and fired four or five shots into it. Video footage from the scene later showed a man being pulled out of the car, either seriously wounded or dead. It was not clear what links the shooting had with the unrest in the town.

Kiev accuses the Kremlin of trying to undermine the legitimacy of presidential elections on May 25 that aim to set Ukraine back onto a normal path after months of turmoil.

However, Russian Foreign Minister Sergei Lavrov said Kiev was “demonstrating its inability to take responsibility for the fate of the country” and warned that any use of force against Russian speakers “would undermine the potential for cooperation”, including talks due to be held on Thursday between Russia, Ukraine, the United States and the European Union.

Relations between Russia and the West are at their worst since the Cold War due to the crisis that began when Moscow-backed Yanukovich was pushed out by popular protests in February.

Moscow then annexed Crimea from Ukraine, saying the Russian population there was under threat. Some Western governments believe the Kremlin is preparing a similar scenario for eastern Ukraine, something Moscow has strenuously denied.

In Kramatorsk, about 15 km south of Slaviansk, gunmen seized the police headquarters after a shootout with police, a Reuters witness said.

The attackers were a well-organised unit of over 20 men, wearing matching military fatigues and carrying automatic weapons, who had arrived by bus. Video footage showed the men taking orders from a commander. Their identity was unclear.

Their level of discipline and equipment was in contrast to the groups who have occupied buildings so far in Ukraine. They have been mostly civilians formed into informal militias with mismatched uniforms.

NATO Secretary-General Anders Fogh Rasmussen expressed concern about similarities in some of the rebels’ appearance to that of the Russian troops who seized control in Crimea.

Calling on Russia to pull back its large number of troops, including special forces, from the area around Ukraine’s border, he said in a statement: “Any further Russian military interference, under any pretext, will only deepen Russia’s international isolation.”

NATO has effectively ruled out military action over Ukraine, which lies outside the Western alliance. However, Washington and NATO leaders have made clear they would defend all 28 member states, including former Soviet republics in the Baltic that are seen as the most vulnerable to Russian pressure.

NATO allies have beefed up their air and sea firepower in eastern Europe. The alliance has also cut off cooperation with Russia and stepped up work with Ukraine, including advising its military on reforms and promising to increase joint exercises.

With EU foreign ministers due to discuss the crisis on Monday, Britain called on Moscow to disown the rebels. “Assumptions that Russia is complicit are inevitable as long as Moscow does not publicly distance itself from these latest lawless actions,” a Foreign Office spokesman said.

Moscow insists its troops near the Ukrainian border are on normal manoeuvres, and Lavrov accused the Western-leaning government in Kiev, viewed by the Kremlin as illegitimate, of stoking the tensions.

The crisis over Ukraine could trigger a “gas war”, disrupting supplies of Russian natural gas to customers across Europe. Moscow has said it may be forced to sever deliveries to Ukraine – the transit route for much of Europe’s gas – unless Kiev settles its debts.

For now, though, the focus of the crisis was in eastern Ukraine, the country’s industrial heartland, where many people feel a close affinity with neighbouring Russia.

In the eastern city of Kharkiv, supporters of the revolution that brought the Kiev leadership to power clashed with opponents who favour closer ties with Russia. Police said 50 people were hurt, 10 of whom received hospital treatment.

In another eastern town, Zaporizhzhya, Interfax news agency said 3,000 pro-European supporters turned out in a unity rally and faced off with several hundred pro-Moscow supporters, m