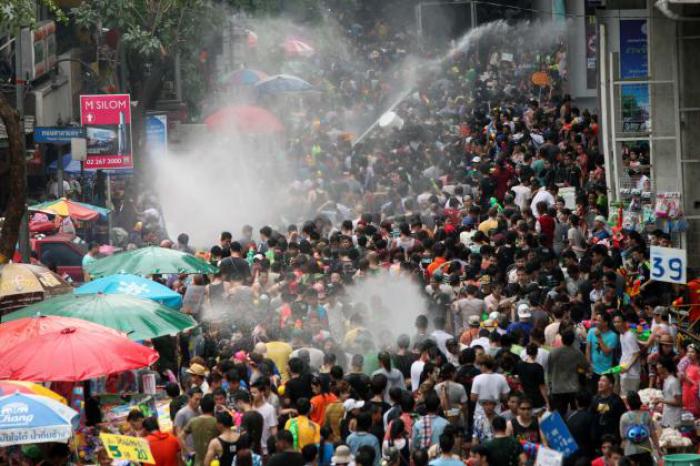 PHUKET: The Songkran festival appears to have cooled down Thai politics, at least for a short while, given the reduction in political violence, and a break in politicians’ activities during the five-day holiday, which began on Saturday.

Revellers enjoyed themselves with traditional water fights across the country, including at political rally venues in Bangkok. Lumpini Park was packed with anti-government protesters in traditional costume challenging each other in water combat. The protesters were restricted from bringing their own water and white clay into the site but were provided with alternatives by the protest organisers.

People’s Democratic Reform Committee chief leader Suthep Thaugsuban slowly rode a motorcycle through Lumpini Park taking water hits and receiving greetings from supporters. A fun fair was also held in the protest site near and around the Government House and a road network occupied by supporters of the Students and People’s Network for Thailand’s Reform.

Thai and foreign revellers gathered and shared the fun on Silom Road across the street. Activities on Khao San Road in Bangkok, the most famous venue for Songkran, warmed up yesterday as more and more celebrants gathered.

Yingluck then presided over the opening ceremony of the Chiang Mai Lanna New Year celebration 2014 in the famous northern resort province, one of the most popular destinations for tourists celebrating Songkran. Yingluck wished happiness for all Thais on this occasion.

Songkran is celebrated traditionally on the calendar dates of April 13, 14 and 15. April 16 is a substitute, because the 13th is a Sunday this year.

In Phichit, a 14-year-old boy was electrocuted and a 16-year-old was injured at a foam party in Muang district, after a foam dispenser apparently suffered an electrical leak. Both victims were dancing near the area and touched the dispenser. The foam party was halted by local officials, who ordered an investigation into the incident.

Alms were given to 187 monks at a ceremony at the Civic Plaza near the Bangkok City Hall by the Bangkok Metropolitan Administration. A trade fair was also scheduled at this venue from yesterday to tomorrowTuesday, featuring traditional goods and food from all 50 capital districts.

The authentic ancient Buddha Sihing image has been placed in a shrine at this event, along with imitative images of nine other Buddha statues from various temples.

Alms ceremonies were held elsewhere across the country yesterday, either at official events by local authorities or private functions, with Buddhist prayers said to bless celebrants who set free birds and fish.

There were 102 deaths and injuries to 893 people in 471 road accidents reported as of yesterday – day two of the seven-day safety campaign period. The daily update was compiled by the Department of Disaster Prevention and Mitigation. Drunk-driving remained the largest cause of accidents (38.43 per cent), followed by speeding (25.27 per cent).

Police pulled over 658,214 motorcycles and vehicles at checkpoints for inspection, with 99,896 motorcyclists and motorists fined for driving without licences and 32,674 for not wearing safety helmets.

PHUKET: Pro-government red-shirt leader Wuthipong Kotthammakhun, who faces an arrest warrant for alleged lese majeste, is believed to be hiding under the protection of an influential figure in the Northeast.

Democrat Party spokesman Chavanond Intarakomalyasut said yesterday that Wuthipong, aka Ko Tee, was hiding in the Kingdom and had not left the country. Chavanond said it was time police proved that they were law enforcers and not servants of politicians.

He said if police made the effort, they would be able to nab both Wuthipong and Ekkapob Luara, aka Tang Acheewa, who is wanted for alleged lese majeste offences following a speech he gave at a red-shirt rally last year.

Police issued an arrest warrant for Wuthipong after a YouTube clip of an interview he gave to a foreign media outlet in which he allegedly made remarks offensive to the monarchy went viral on social media networks.

Chavanond called on the police to get information about the plot to topple the monarchy from Department of Special Investigation (DSI) director-general Tarit Pengdith, saying Tarit had knowledge of the plot and links within the Pheu Thai Party.

He said police should start probing the alleged plot against the monarchy by looking into the case of Wuthipong. “If police are reluctant to take necessary action for fear of negative consequences to vested interest groups, the country will continue to face political conflict,” he said.

Deputy Democrat Party Spokesman Jurit Laksanawisit said Wuthipong may have now realised the meaning of the saying “Butcher the donkey after it has finished its job on the mill,” because it looked like the Thaksin camp had severed ties with him. He said United Front for Democracy against Dictatorship co-leader Korkaew Pikulthong had said that if Wuthipong said what was in the YouTube clip, he had to take responsibility.

But former Pheu Thai Ubon Ratchathani MP Somkid Chuakong dismissed speculation Wuthipong was hiding in Isaan, saying the man was more familiar with Bangkok and Pathum Thani, his stronghold where he has led political activities. He urged Wuthipong to turn himself in to fight the charges.

Police searched Wuthipong’s Red Guard radio station and his house in Pathum Thani, looking for him.

The arrest warrant had been circulated online in the police department’s information system nationwide.

A person found guilty of lese majeste, according to Article 112 of the penal code, could face from three up to 15 years in jail. These offences have a 15-year statute of limitations.

Manont Sailektim, 35, filed a complaint with police that an unknown number of assailants threw molotov cocktails into the plastic bottle recycle factory which also operates as a radio station.

Police said after inspecting the scene the air conditioners and wiring systems in the factory had been damaged after the petrol bombs exploded and sparked the fire.

Police suspected the assailants intended to destroy equipment to prevent the station broadcasting.

Arthit Jitsawaeng, DJ of FM 105.25, said the People’s Democratic Reform Committee might have believed the station was linked to Wuthipong and there had been threats before the incident.

He said Wuthipong had nothing to do with the broadcaster. “We have different opinions from Wuthipong. We have only campaigned for democracy but we also have been attacked,” he said.