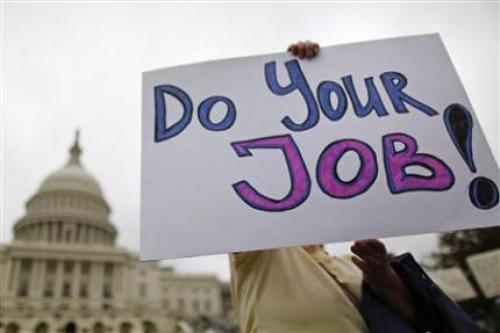 PHUKET: A month of combat in the U.S. Congress over government spending showed signs of giving way to a Senate deal to reopen shuttered federal agencies and prevent an economically damaging default on federal debt.

Senate Majority Leader Harry Reid, a Democrat, and his Republican counterpart, Mitch McConnell, ended a day of constant talks with optimistic proclamations, as details leaked out of the pact they were negotiating.

“We’ve made tremendous progress,” Reid said at the end of a Senate session during a federal holiday, underscoring the urgency of settling a fiscal crisis that was nearing a Thursday deadline. The U.S. Treasury Department estimates it will reach a $16.7 trillion borrowing limit on October 17.

“We hope that with good fortune … that perhaps tomorrow will be a bright day,” Reid said, hinting at the possible announcement of a bipartisan Senate deal.

McConnell, who has been a fierce critic of Reid all year instead had a smile on his face and upbeat words. “We’ve had a good day; had a good day yesterday,” he said of his work with Reid.

The plan under discussion would promptly end a partial government shutdown about to enter its third week. It also would raise the debt ceiling by enough to cover the nation’s borrowing needs at least through mid-February 2014, according to a source familiar with the negotiations.

Government operations would be funded through the middle of January, keeping in place the across-the-board “sequester” spending cuts that took effect in March, though government agencies would have more latitude to ease their impact. It would also set up a new round of budget talks that would try to strike a bargain by year’s end.

With the Reid-McConnell talks continuing, these details were subject to change, according to Senate aides.

Democrats look to have fended off any major changes to President Barack Obama’s signature health law, something that could fuel resistance, particularly by conservative Republicans in the House of Representatives who had insisted on delaying “Obamacare” as a condition of continued government funding.

House Speaker John Boehner could face an insurrection that could threaten his position as Washington’s top Republican if he tries to advance a bill over the objections of rank-and-file conservatives in that chamber.

Boehner has not publicly commented on the Senate negotiations. A spokesman said the House would review whatever the Senate passes.

In an early sign of Republican opposition, Representative Joe Barton of Texas told reporters: “No deal is better than a bad deal,” as he downplayed the impact of an historic credit default if the U.S. limit on borrowing is not quickly raised.

But Republican Representative Peter King of New York said it would be hard for the House not to put it to a vote if it gets strong support from Senate Republicans.

“For the (Senator) Cruz wing of the party who say we should get a better deal, I say we would have gotten a better deal if we had not shut the government down and gotten right to debt negotiations,” said King, a moderate who has criticized the tactics of the conservative Tea Party faction.

Republicans have taken a hit in opinion polls since the standoff began and some in the party worry it could hurt their chances to win control of the Senate in next year’s midterm elections.

A Washington Post/ABC News poll released yesterday found that 74 percent of Americans disapprove of the way congressional Republicans have handled the standoff, compared with a 53 percent disapproval rating for Obama.

Even if a deal is reached today, it was unclear whether Congress can pass legislation to avert the October 17 default deadline. Hard-liners such as Texas Republican Senator Ted Cruz might be able to exploit Senate rules to delay a vote for several days.

Confronted by a throng of reporters yesterday, Cruz responded to repeated questions about his intentions by only saying, “We’ll have to wait to see what the details are” of any pact.

Because of the uncertainty over U.S. finances, banks and money market funds are already shunning some government securities that are often used as collateral for short-term loans and to facilitate many other transactions.

Though some Republicans have argued that the government could avoid serious consequences by prioritizing interest payments over other types of spending, that view is not widely held by the public.

A Reuters/IPSOS poll released found that only 25 percent believe the debt ceiling issue is “overblown.”

U.S. stocks were buoyed by prospects of a deal. The S&P 500 Index closed up 0.41 percent while the Nasdaq Composite Index ended 0.62 percent higher.

The government shutdown is beginning to weigh on the economy. The hundreds of thousands of federal employees who have been temporarily thrown out of work are likely to get back-pay when the standoff is resolved. But they aren’t getting paid now, forcing many to dial back on personal spending and cancel holiday travel plans.

The crisis is only the latest in a series of budget battles in recent years that have spooked investors and consumers. The uncertainty has weighed on the economy and boosted the unemployment rate by 0.6 of a percentage point, or the equivalent of 900,000 jobs since late 2009, according to a new estimate by the Peter G. Peterson Foundation, a think tank.

Republicans in the Senate are pushing to include slight modifications to the Affordable Care Act. One would toughen income verification for those seeking health insurance subsidies under the law. Another could delay a reinsurance fee included in the law that otherwise would start in 2014, according to a labour-union source.

Throughout the shutdown, Obama has said Republicans must agree to reopen the government and extend the debt ceiling before the two sides can begin talks on spending or tweaks to his Affordable Care Act.

Over 1,600 migrants rounded up after ethnic riots in Moscow
Reuters / Phuket Gazette

PHUKET: Russian police rounded up more than 1,600 migrants yesterday in Moscow after rioting swept through a southern neighbourhood over a fatal stabbing of a Russian that many residents blame on a man from the Caucasus region.

Advocacy groups warned migrants from Russia’s mainly Muslim Caucasus region and Central Asia of an increased risk of attacks in the worst ethnic disturbance in Moscow in three years. Authorities stepped up police patrols in the capital.

Some 200 residents rallied in the Biryulyovo district last ni