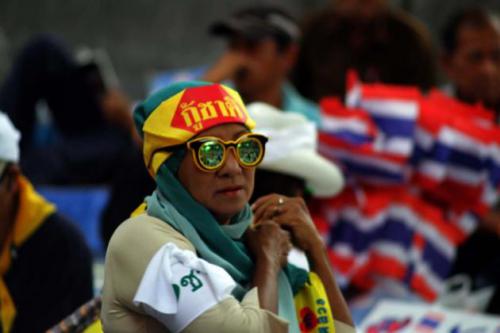 PHUKET: A splinter group of the People’s Army against the Thaksin Regime has drawn so much growing support from the public that the government is now considering whether to extend the Internal Security Act enforcement.

The splinter group is the Students and People’s Network for Thailand Reform. It has been organizing its rally at the Urupong Intersection since Thursday night when the People’s Army agreed to move its protesters back to the Lumpini Park.

After the People’s Army gave in to the ISA enforcement and retreated, some protesters became angry that their leaders broke a promise not to disperse from the front of Government House. So, the sprinter group staged a rally at the intersection, which is next to but outside areas affected by the Security Act.

On the first day of the rally, the demonstrators numbered only a few hundred and were led by student activists of Ramkamhaeng University.

But that night small fire bombs and bags containing poison ivy were hurled at the protesters from the expressway, which put a media spotlight on the group. And more people started to join the rally, partly because the group has separated from the People’s Army, which the public does not support.

Many people are unsure if the People’s Army has an ulterior political motive. And because the Students and People’s Network for Thailand Reform has a better image, more and more people have joined the rally.

The network is being closely monitored by officials. Speculation that the group may move its rally prompted police to invoke the ISA and close 14 roads around Government House.

Security agencies have assessed the situation and believe that leaders of the Urupong rally are student activists from the San Saeng Thong Party.

Former student activists have also gone to the site to provide advice on how to organize the rally. They included lawyer Nitithorn Lamluan, a coordinator of the Green Politics Group.

The group has attacked the government over the cost of living and falling crop prices. Their rally has also been joined by members of the middle-class and some supporters of political groups. Peace-keeping spokesman Police Maj General Piya Uthayo said yesterday the number of demonstrators at Urupong peaked at 1,100 on Sunday night.

The second group is the Students and People’s Network for Thailand Reform, led by Uthai Yodmanee, president of the Ramkhamhaeng Students Organisation. They are supported by Nitithorn, a leader of the yellow-shirt movement. The Democrat Party has used its Blue Sky satellite station as a mouthpiece for the Urupong group.

Students from some vocational schools joined the Urupong rally on the weekend and after school. Some office workers also joined the rally after office hours, and some demonstrators at Lumpini Park also went to the Urupong rally at night, so the number of people was over 1,000 at its peak. But most dispersed after 10pm.

The source said a third group was led by Thaikorn Polsuwan. It has only about 30 followers. Thaikorn’s group has been camping at Sanam Luang.

PHUKET: More than 2.7 million children in the country are addicted to computer games, according to the latest estimate based on a nationwide survey.

Conducted during the second quarter of this year, the survey covered 20,000 children and suggests that as many as 15 per cent of children are addicted to gaming. There are about 18 million children in Thailand’s population according to official statistics.

“Children with serious gaming addictions are aggressive and show a tendency towards violence. Some have even been found to physically hurt their parents, or attempt suicide when barred from playing games,” Assoc Prof Chanvit Pornnoppadol said yesterday at an event to launch the “Thai Children and IT” project.

Chanvit, who works for the Department of Psychiatry, the Faculty of Medicine at Siriraj Hospital, said that some gaming addicts also skipped classes and stayed awake late into the night to play games.

Children who developed serious forms of gaming addiction needed to undergo treatment, said Chanvit, adding that between 30 and 40 children seek treatment each year.

“However, I believe the number of children needing treatment is much higher than this,” he said.

Speaking at the same event, Sura Techatat, adviser to the culture minister, acknowledged that IT technology also had its negative side.

“We have to watch out for problems that may occur with our children and try to find solutions,” he said.

“We are also trying to boost their access to safe and constructive media sources,” he said.

PHUKET: A drug dealer was arrested yesterday after attempting to donate 11 ya bah pills at a centre collecting donations for flood victims in Chon Buri’s Sattahip district.