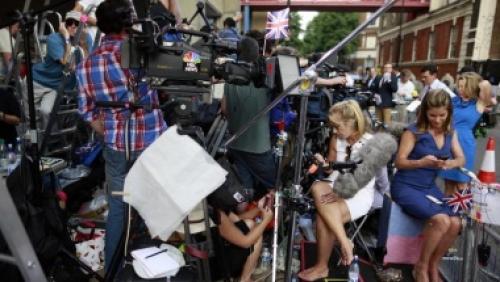 
Baby boy for Prince William and wife Kate
Reuters / Phuket Gazette
PHUKET: Prince William’s wife Kate gave birth to a boy yesterday afternoon, the couple’s first child and the third in line to the British throne, heralding celebrations in London and messages of goodwill from across the world.

“We could not be happier,” Prince William said in a brief statement, after he witnessed the birth of his son at 4:24 p.m. (10:24pm Phuket), an event that sparked an international media frenzy and the illumination of London landmarks in blue.

His office said Kate and the baby, weighing 8 lbs 6 oz (3.8 kg) and to be publicly named at a later date, were both doing well and would stay in hospital overnight.

It might take some time for the name to emerge however. The announcement of William’s name took more than a week, but bookmakers make George the favorite, followed by James.

As the birth of the queen’s third great-grandchild was announced, a loud cheer went up from the well-wishers and media gathered outside St. Mary’s Hospital in west London, where William was also born to the late Princess Diana in 1982.

“It is an incredibly special moment for William and Catherine and we are so thrilled for them on the birth of their baby boy,” said Prince Charles, the heir to the throne.

Within minutes, messages of congratulations began flooding in, while crowds gathered outside the queen’s London residence Buckingham Palace where an official notice was placed on a gold-coloured easel at the main gates.

U.S. President Barack Obama was one of the first world leaders to welcome the birth.

“Michelle and I are so pleased to congratulate The Duke and Duchess of Cambridge on the joyous occasion of the birth of their first child,” he said. “We wish them all the happiness and blessings parenthood brings.”

The royal couple, officially known as the Duke and Duchess of Cambridge, had arrived at the hospital shortly before 6 a.m. and entered through a back door to avoid massed ranks of British and international media camped outside the main entrance.

Kate and William, both aged 31, met when they were students at St. Andrews University and were married in April 2011 in a spectacular wedding broadcast around the world.

The royal birth has provoked a similar frenzy, with media keeping up a deluge of speculative reports for days beforehand and particularly throughout the day.

“Right across the country and indeed right across the Commonwealth people will be celebrating and wishing the royal couple well,” Prime Minister David Cameron told waiting reporters in Downing Street.

“It is an important moment in the life of our nation but I suppose above all it’s a wonderful moment for a warm and loving couple who got a brand new baby boy.”

Outside Buckingham Palace, there was a party atmosphere with well-wishers laying flowers and teddy bears, singing “God Save the Queen” and “Happy Birthday”, and children waving flags.

“The build up to the birth has been so big I’m just happy it’s finally come. I’m pleased it’s a boy, you always want a boy really,” said Alice Durrans, who rushed from a nearby restaurant after hearing the news.

Deborah Beeson, a banker from the United States, was ecstatic.

“It’s wonderful. I got chills. I cried,” she said. “You know America loves Kate. She’s just beautiful, she has dignity.”

There will be a 41-gun salute at London’s Hyde Park and 62 rounds fired at the Tower of London on Tuesday to herald news of the birth.

The baby arrives at a time when the royal family is riding a wave of popularity. An Ipsos Mori poll last week showed 77 percent of Britons were in favour of remaining a monarchy over a republic, close to its best-ever level of support.

The dark days for the House of Windsor after the death of William’s mother Princess Diana in 1997, which led to public anger at the royals, have been replaced with outpourings of support for William and Kate’s wedding and the Diamond Jubilee for the queen last summer.

“It’s been a remarkable few years for our royal family,” Cameron said.

The couple, who have been living in a cottage in north Wales where William is based as a Royal Air Force helicopter pilot, will eventually take up residence with their baby at Apartment 1A at London’s Kensington Palace when a 1 million pound refurbishment is completed later this year.

The young royal couple have become global stars after some 2 billion people tuned in to watch their glittering marriage ceremony in 2011, while Kate is seen as a fashion icon.

Philippe, 53, took the oath and was sworn in as the country’s seventh king during a ceremony in parliament. “I am aware of the responsibility which is now incumbent upon me. This oath is a solemn promise which renews the relationship of trust that has existed for nearly two hundred years between the King and the Belgian people,” he said.

The trained air force pilot, who was educated at Oxford and Stanford, thanked his father for “maintaining this trust” by being close to the people while also being attentive and committed in the exercising of his responsibilities as head of state. He further thanked his mother, Queen Paola, for assisting Albert II while devoting herself to fields such as education and culture.

“With serenity, dignity and devotion, you have accompanied the Belgian people on sometimes difficult occasions, as well as during happy moments, at a time marked by profound change throughout the world,” Philippe said of his father during the swearing-in ceremony. “We are most grateful to you.”

The new king said he was fortunate to be able to count on the support of his wife, Queen Mathilde, and complimented her for her “innate sense” of human contact. “Along with our dear children, we shall confidently begin this new chapter in our lives and that of our country,” he said.

To warm applause, Philippe promised to uphold the country’s constitution. “I am beginning my reign with the determination to place myself at the service of all Belgians. I shall therefore work in perfect understanding with the government and consistent with the Constitution,” he remarked, adding that he intends to intensify his ties with the people.

Philippe also reaffirmed his support for the European Union (EU), saying it should be a source of hope and confidence. “The Europe we are working towards must bring growth and solidarity. We are proud that our capital city is also the capital of Europe and that at each moment in its history, Belgian leaders have worked at the heart of this great project,” he said.