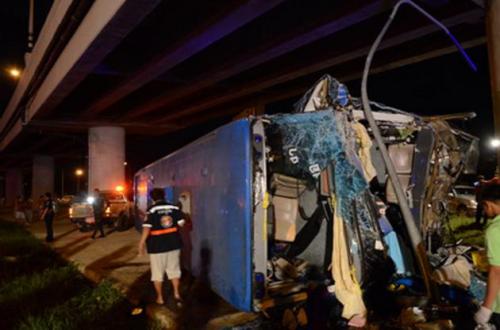 PHUKET: More than 20 passengers were injured when a bus en route from Bangkok to Phang Nga, north of Phuket, overshot a curve and crashed into a road barrier in Pranburi in Prachuap Khiri Khan province yesterday.

A reported 21 passengers and the driver were sent for emergency medical treatment at Pranburi and Thanarat hospitals. Three were sent to Hua Hin and San Paolo hospitals.

Two of the injured were Chinese tourists. No fatalities were reported.

Pranburi police superintendent Colonel Wanchai Taranadhram said the driver might have fallen asleep while driving the bus, owned by Express Company, at high speed and in the wrong lane.

Police would investigate to find out the cause of the accident, he said.

Phuket rain and rockslides in Ranong