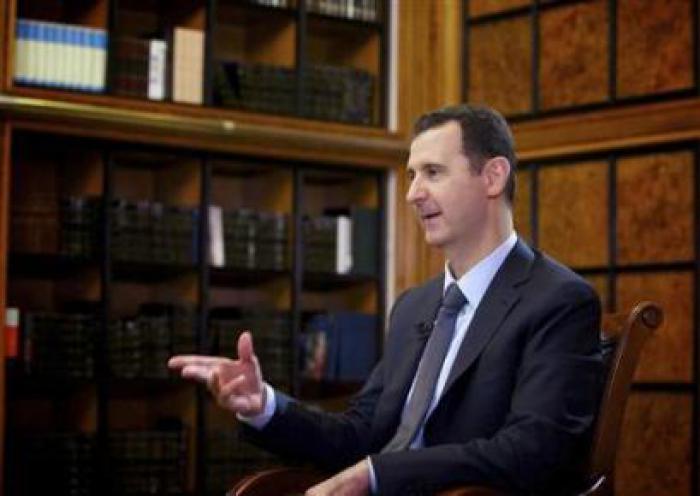 PHUKET: Syrian President Bashar al-Assad will stand for re-election this year and no longer faces a threat of being overthrown, the head of his Lebanese Shi’ite ally Hezbollah said in an interview published on Monday.

Hezbollah Secretary-General Sayyed Hassan Nasrallah, whose fighters have been supporting Assad inside Syria, also said that after three years of conflict the danger of the country fragmenting was receding.

Assad has lost control of large swathes of northern and eastern Syria to Syrian Islamist rebels and foreign jihadis. But his forces, backed by Hezbollah, Iraqi Shi’ite Muslim fighters and Iranian military commanders, have driven rebels back from around Damascus and secured most of central Syria.

“In my estimation, the phase of overthrowing the regime and overthrowing the state is over,” Nasrallah told Al-Safir newspaper, adding that he believed Assad would put himself forward for a third presidential term in a vote due by July.

“It’s natural that he nominates himself, and I believe that will happen,” Nasrallah said of the planned vote expected to take place despite ongoing conflict and massive displacement within Syria. Assad’s international foes have said the poll would be a “parody of democracy”.

Rebels “cannot overthrow the regime (but) they can wage a war of attrition,” Nasrallah said. “The real danger was, and still is to a certain extent, the end of Syria, its fragmentation. The danger was real and serious… I think we have passed the danger of fragmentation.”

More than 150,000 people have been killed in Syria’s civil war, according to the Syrian Observatory for Human Rights monitoring group. A third of those were pro-Assad forces, including 364 Hezbollah fighters, it said.

Nasrallah dismissed rebel gains over the last two weeks in the coastal province of Latakia – a stronghold of Assad’s minority Alawite faith where rebels have seized the Kasab border crossing – as little more than a distraction.

“We can’t call what is happening in Latakia and Kasab a big battle … it’s a limited operation,” he said, adding that talk of a big rebel offensive in the southern province of Deraa on the Jordanian border had also been overstated.

As the military threat against Assad eased, so too would the political pressure “starting with Saudi Arabia and Qatar”, Nasrallah said, pointing to two Sunni Muslim Gulf Arab states who have backed the mainly Sunni rebels battling Assad.

“I’m not saying they have changed their positions, but the strength of their stances, the level of their intervention and the hopes that they had, have changed a lot,” he said – in contrast to what he described as the unflinching support Assad enjoyed from his own allies.

Shi’ite Hezbollah’s intervention in Syria, alongside the flow of Sunni fighters and weapons from Lebanon to support the rebels, has fuelled sectarian tensions inside Lebanon.

Radical Sunni groups have claimed responsibility for car bombs which targeted the southern Beirut suburbs where Hezbollah holds sway, and rockets have also struck Shi’ite and Sunni towns in the Bekaa Valley.

Lebanese Sunni politicians have criticised Hezbollah, which was set up three decades ago to fight Israeli occupation forces in the south of the country, for wading into an Arab conflict.

But Nasrallah denied that his group’s military role in Syria was losing it popularity, saying its campaign against Syrian rebels near the Lebanese border was helping reduce the risk of bombings inside Lebanon.

Even some members of Lebanon’s anti-Hezbollah March 14 coalition tacitly supported the group’s actions, he said.

Nasrallah also said Hezbollah was responsible for a bombing of an Israeli border patrol in March, saying the attack was in response to an Israeli air strike against a Hezbollah target on the Syrian-Lebanese border a month earlier.

“The Shebaa Farms bomb … was the work of the resistance, the work of Hezbollah,” he said. “The is not the (full) response, but part of the response to the Israeli raid.”

He appeared to be referring to a March 14 incident when Israel’s military said an explosive device was detonated against Israeli soldiers patrolling the border with Lebanon. Israel shot six mortars into southern Lebanon in response, but no one was wounded on either side, security and military sources said.