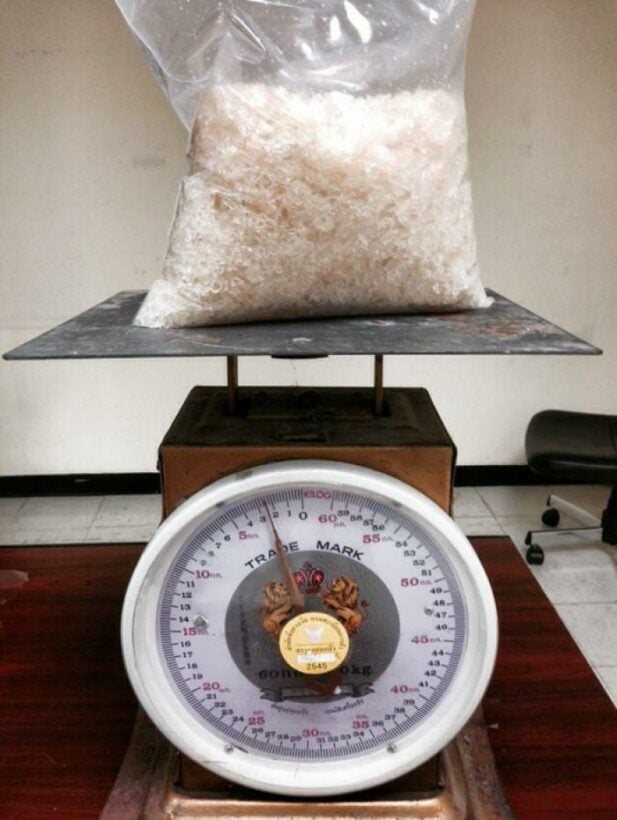 PHUKET: A Thai woman was arrested at Phuket International Airport yesterday after she tried to smuggle 2.5kg of ya ice (crystal methamphetamine) from China into Phuket.

Customs officers valued the drugs at about 7 million baht.

“Buachompoo Pattanapiyawach, 39, was caught with drugs in her luggage after it was scanned by an x-ray machine,” Phuket Airport Customs Director Montira Cherdchoo told a press conference this morning.

“She caught our officers’ attention because she was acting like she was in a hurry,” said Ms Montira. “So the officers started chatting with her while her luggage was being scanned by the machine.

“She seemed nervous, and the officers asked to search her luggage after suspiciously dense items were identified during the x-ray scan.”

Officers found the suspect items in the luggage were instant cereal packets. However, after opening the packets, instead of finding wild oats, they discovered large packets of white crystals.

“We tested the suspect substance and confirmed it was ya ice,” Ms Montira said.

Ms Buachompoo denied any knowledge of the drugs hidden among her belongings.

“I had no idea what is was in the luggage. A friend asked me to pick up the bag in Guangzhou, China, and deliver it to a person in Phuket,” she told the press.

Ms Buachompoo has been charged with possession and trafficking of a Category 1 drug with intent to sell.

“She has been handed over to Tah Chat Chai Police for further questioning,” said Ms Montira.

If she is found guilty of the charges against her, Ms Buachompoo faces the death penalty.

However, one Customs officer told the Phuket Gazette, “If she confesses or gives useful information to the police investigating her case, her penalty may be reduced to life imprisonment.”