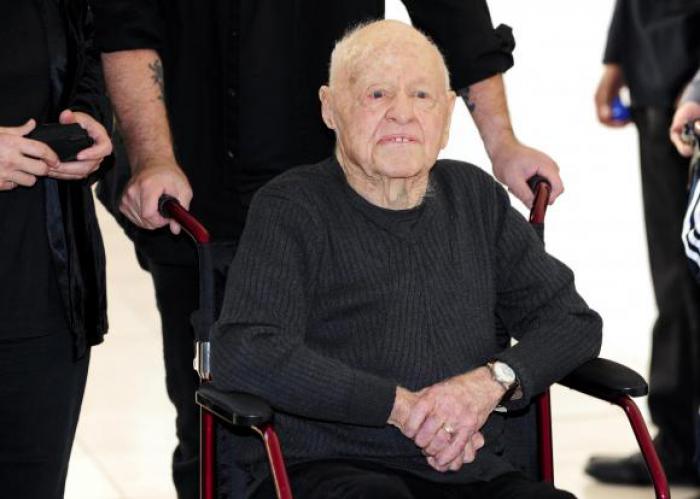 PHUKET: Actor Mickey Rooney, who became the United States’ biggest movie star while still a brash teenager in the 1930s and later a versatile character actor in a career that spanned 10 decades, died on Sunday, friends and entertainment media said. He was 93.

Rooney, who developed a reputation as a hard-partying, off-screen brat in his heyday and married eight times, died after a long illness, the TMZ celebrity website said. Show business website Variety also reported his death.

TMZ and Variety did not give a cause of death or say where Rooney died. A spokesman was not immediately available for comment.

“He was undoubtedly the most talented actor that ever lived.

There was nothing he couldn’t do,” actress Margaret O’Brien said in a statement.

She said she had worked recently with Rooney on a film, “The Strange Case of Dr Jeckyll and Mr Hyde,” and he “was as great as ever” during the filming.

Actress Rose Marie, a long-time friend, said he was one of the greatest talents show business had ever had. “I shall miss him and the world shall miss him,” she said in a statement.

Rooney was an entertainer almost from the day he was born in New York on September 23, 1920. His parents, Joe Yule Sr. and Nell, had a vaudeville act and Joe Jr., as he was known then, was not yet 2 years old when he became a part of it, appearing in a miniature tuxedo.

As he grew older, Rooney added dancing and joke-telling to his stage repertoire before landing his first film role – a cigar-smoking little person in the silent short “Not to Be Trusted.”

After his parents split, Rooney and his mother moved to California where she steered him into a movie career. He was about 7 when he was cast as the title character in the “Mickey McGuire” series of film shorts that ran from 1927 to 1934. Nell even had his name changed to Mickey McGuire before changing the last name again to Rooney when he began getting other roles.

As a teenager, Rooney was cute, diminutive (he topped out at 5 feet 2 inches and bursting with hammy energy. Those attributes served him well when he was cast as the wide-eyed, wise-cracking Andy Hardy in a series of films that would give movie-goers a brief opportunity to forget the lingering woes of the Great Depression in the late 1930s.

The first “Andy Hardy” film, “A Family Affair” in 1937, became a surprise hit and led to a series of 16, with Rooney’s character becoming the main focus and helping make him the biggest box-office attraction of 1939 and 1940. The Hardy films were wholesome, sentimental comedies in which Andy would often learn a valuable lesson from his wise father, Judge Hardy.

“Call him cocky and brash but he has the sort of exuberant talent that keeps your eyes on the screen,” the New York Times said of Rooney in a 1940 review.

It was in “Love Finds Andy Hardy” that he first worked with Judy Garland, who was on the verge of superstardom herself with “The Wizard of Oz.”

They made two more Hardy movies together and in 1939 were cast together in “Babes in Arms,” a Busby Berkeley musical about two struggling young entertainers that earned Rooney, then 19, an Academy Award nomination.

Movie-goers loved the lively “let’s put on a show!” chemistry that Rooney and Garland brought to the screen. They were paired again in “Girl Crazy” in 1943.

“We weren’t just a team, we were magic,” Rooney said in a stage show about his life.

Rooney proved he could handle serious roles, too, with a notable performance in 1938 in “Boys Town” as a troubled kid helped out by a kindly priest played by Spencer Tracy.

He picked up another Oscar nomination for “The Human Comedy” in 1943 and starred with Elizabeth Taylor in “National Velvet” in 1944.

Off the screen, the young Rooney was the Justin Bieber of his time. His fame, money, gambling, lust and mercurial nature were problems for the MGM studio, which did not like seeing its young star sully his reputation and box-office potential.

The studio assigned a full-time staffer to keep Rooney out of trouble but his antics still frequently ended up in gossip columns. MGM was greatly upset when Rooney, 21, married Ava Gardner, then a 19-year-old aspiring actress, in 1942. The marriage lasted barely a year.

From 1939 to 1941 Rooney had ranked as the top U.S. male box-office attraction. After he returned from serving the military as an entertainer during World War Two, the public was growing weary of seeing him play teenagers and he would have to retool his career.

After the rush of stardom, Rooney was battered by a stalled career, drug and gambling addictions, bad marriages, a failed production company and the deep financial problems they caused. He lost his hair and grew paunchy as he aged but he persevered.

“I’m a ham who wants to be a small part of anything,” he told the Times.

He took small parts, worked in lesser movies and tried a couple of television shows. He picked up two more Oscar nominations for 1956’s “The Bold and the Brave” and “The Black Stallion” in 1979.

In 1979 he also broke through on Broadway, harkening back to his vaudeville beginnings with “Sugar Babies,” a burlesque-style revue with MGM tap dancer Ann Miller in which he sang, danced and dressed in drag. He said the role saved him from being “a famous has-been.”

“The American public is my family,” Rooney said. “I’ve had fun with them all my life.”

Rooney won an Emmy and a Golden Globe in 1982 for the TV movie “Bill,” playing a mentally handicapped man trying to live on his own. He was given an lifetime achievement Oscar in 1983.

In 1978 he found a lasting marriage with country singer Jan Chamberlin. In his late 80s they toured the country with a song-and-dance act.

Rooney, who had five sons and five daughters, told a U.S. Senate committee on aging that he had been emotionally and financially abused by family members. He later said Christopher Aber, Chamberlin’s son, had deprived him of food and medicine, prevented him from leaving the house and meddled in his financial affairs.