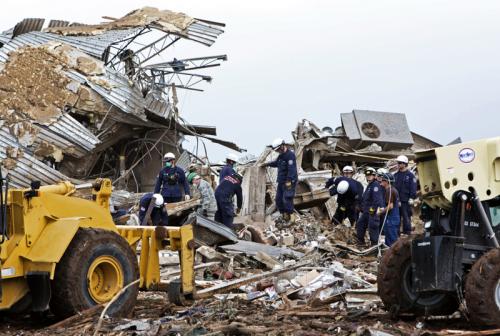 
Oklahoma tornado survivor search continues, toll lowered to 24
Reuters / Phuket Gazette
PHUKET: Rescuers went building to building in search of victims and thousands of survivors were homeless on Tuesday, a day after a massive tornado tore through a suburb of Oklahoma City, wiping out whole blocks of homes and killing at least 24 people.

Nine children were among the dead, including seven who died at Plaza Towers Elementary School, which took a direct hit in the deadliest tornado to strike the United States in two years.

Emergency workers pulled more than 100 survivors from the rubble of homes, schools and a hospital, and around 237 people were injured. Cadaver dogs sniffed through the scattered planks and bricks of ruined homes on Tuesday.

The 2-mile (3-km) wide tornado ripped through Moore on the outskirts of Oklahoma City on Monday afternoon, trapping victims beneath the rubble and tossing vehicles about as if they were toys. On block after block of residential neighbourhoods, there was nothing left but mangled debris.

The National Guard, fire-fighters from more than a dozen fire departments and rescuers from other states worked all night under bright spotlights trying to find survivors in the town of 55,000 people.

Plaza Towers Elementary School was one of five schools in the path of the tornado. “They literally were lifting walls up and kids were coming out,” Oklahoma State Police Sergeant Jeremy Lewis said. “They pulled kids out from under cinder blocks without a scratch on them.”

The Oklahoma state medical examiner’s office said 24 bodies had been recovered from the wreckage, down from the 51 they had reported earlier. The earlier number likely reflected some double-counted deaths, said Amy Elliott, chief administrative officer for the medical examiner.

“There was a lot of chaos,” she said.

Thunderstorms and lightning slowed the rescue effort on Tuesday and made conditions tough for families left with nothing but the clothes on their backs.

Moore Fire Chief Gary Bird vowed at a news conference to search through every damaged building “at least three times,” as authorities urged people to stay away from the area to allow rescue workers to complete the search.

As long as it takes

President Barack Obama declared a major disaster area in Oklahoma, ordering federal aid to supplement state and local efforts in Moore after the deadliest U.S. tornado since 161 people were killed in Joplin, Missouri, two years ago.

“The people of Moore should know that their country will remain on the ground, there for them, beside them, as long as it takes,” Obama said at the White House.

Glenn Lewis, the mayor of Moore who was also mayor when a major tornado struck in 1999, said the whole town looked like a debris field and there was a danger of electrocution and fire from downed power lines and broken natural gas lines.

On Tuesday morning, a helicopter was circling overhead and thunder rumbled from a new storm as 35-year-old Moore resident Juan Dills and his family rummaged through the remains of what was once his mother’s home. The foundation was laid bare, the roof ripped away and only one wall was still standing. They found a few family photo albums, but little else.

“We are still in shock,” he said. “But we will come through. We’re from Oklahoma.”

National Weather Service Storm Prediction Center meteorologist Rick Smith said the storm was about 17 miles (23 km) long with maximum wind speeds of about 190 miles per hour (306 kph). On the Enhanced Fujita Scale it was ranked EF4, the second most powerful category of tornado.

Authorities warned the town 16 minutes before the tornado touched down just after 3 p.m., which is more than the average eight to 10 minutes of warning, said Keli Pirtle, a spokeswoman for the center.

Shelters were opened for families who lost their homes and universities offered to house people. Albert Ashwood, director of Oklahoma’s department of emergency management, said it was too early to say how many people were left homeless, but clearly it was thousands given the extent of the damage.

Diana Tinnin, 60, was at home with her brother when the storm hit. Her three-bedroom, ranch-style home had no basement, so they huddled in a bathtub. “I lost my house. Everything fell on top of us.”

U.S. Representative Tom Cole, who lives in Moore, said the Plaza Towers school was the most secure and structurally strong building in the area.

“And so people did the right thing, but if you’re in front of an F4 or an F5 there is no good thing to do if you’re above ground. It’s just tragic,” he said on MSNBC-TV.

Miguel Macias and his wife, Veronica, had two children at the Plaza Towers school and found 8-year-old Ruby first after rescue workers carried the girl from the destruction. But their son, 6-year-old Angel, was nowhere to be found, said Brenda Ramon, pastor of the Faith Latino Church where the family are members.

Ramon and several congregation members spent hours helping the family search for Angel and calling area hospitals. The boy was finally located at a medical center in Oklahoma City about five hours after the tornado hit.

“It was heart-breaking,” Ramon said. “We couldn’t find him for hours.” The boy had wounds to his face and head, but was not badly hurt, Ramon said. “Their little bodies are so resilient.”

Survivors of the storm suffered injuries ranging from minor cuts and bruises to open wounds, impalements and open fractures, said Dr. Roxie M. Albrecht, the director of trauma and surgical critical care at the Oklahoma University Medical Center, which cared for 51 children and 35 adults.

Witnesses said Monday’s tornado appeared more fierce than the giant twister that was among the dozens that tore up the area on May 3, 1999, killing more than 40 people and destroying thousands of homes. That tornado ranked as an EF5 tornado with wind speeds of more than 200 mph (320 kph).

The 1999 tornado ranks as the third-costliest tornado in U.S. history, having caused more than $1 billion in damage at the time, or more than $1.3 billion in today’s dollars. Only the devastating Joplin and Tuscaloosa tornadoes in 2011 were more costly. (Graphic https://link.reuters.com/gec38t)

Authorities urged people who want to help to donate cash to the Red Cross and other reputable charities rather than sending goods.

Akbar Hashemi Rafsanjani, a veteran companion of the Islamic Republic’s founder, a former president and thought potentially sympathetic to reform, was denied a place on the ballot by the Guardian Council of clerics and jurists, state media said.

So too was Esfandiar Rahim Mashaie, a close aide to outgoing president Mahm