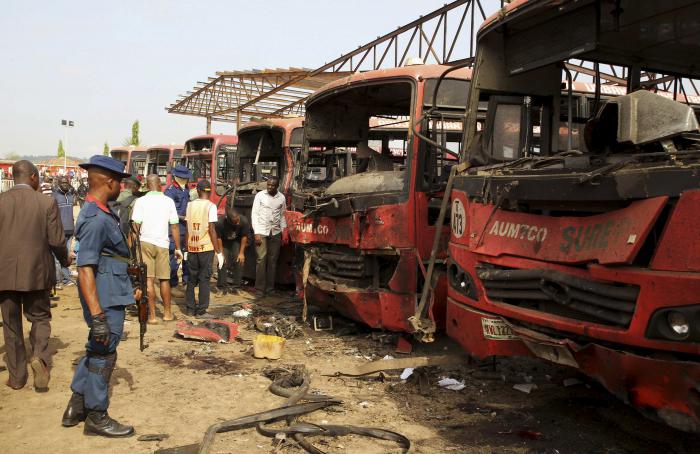 PHUKET: A morning rush hour bomb killed at least 71 people at a Nigerian bus station on the outskirts of the capital on Monday, raising concerns about the spread of an Islamist insurgency after the deadliest ever attack on Abuja.

President Goodluck Jonathan pointed the finger of suspicion at Boko Haram, although there was no immediate claim of responsibility from the Islamist militants who are active mainly in the northeast. As well as the dead, police said 124 were wounded in the first attack on the federal capital in two years.

Visiting the scene, Jonathan denounced “the activities of those who are trying to move our country backwards” by staging such an attack. “We will get over it … The issue of Boko Haram is temporary,” he said, imploring Nigerians to be more vigilant in the face of suspicious characters.

Security experts suspect the explosion was inside a vehicle, said Air Commodore Charles Otegbade, director of search and rescue operations. The bus station, 8 km (5 miles) southwest of central Abuja, serves Nyanya, a poor, ethnically and religiously mixed satellite town where many residents work in the city.

“I was waiting to get on a bus when I heard a deafening explosion, then saw smoke,” said Mimi Daniels, who escaped from the blast with minor injuries to her arm. “People were running around in panic.”

Bloody remains lay strewn over the ground as security forces struggled to hold back a crowd of onlookers and fire crews hosed down a bus still holding the charred bodies of commuters.

“These are the remains of my friend,” said a man, who gave his name as John, holding up a bloodied shirt. “His travel ticket with his name on was in the shirt pocket.”

The attack underscored the vulnerability of Nigeria’s federal capital, built in the 1980s in the geographic centre of the country to replace coastal Lagos as the seat of government for what is now Africa’s biggest economy and top oil producer.

Boko Haram militants are increasingly targeting civilians they accuse of collaborating with the government or security forces.

“In some ways it’s not a big surprise,” said Kole Shettima, director of the Abuja office of U.S. charitable institution, the

MacArthur Foundation. “The situation has been escalating.”

“It’s a statement that they are still around and they can attack Abuja when they want, and instill fear.”

The militants, who want to carve an Islamic state out of Nigeria, have in the past year mostly concentrated their attacks in the northeast, where their insurgency started.

There had been no such violence near the capital since suicide car bombers targeted the offices of the newspaper This Day in Abuja and the northern city of Kaduna in April 2012.

Security forces at the time said that was because a Boko Haram cell in neighbouring Niger state had been broken up.

A Christmas Day bombing of a church in Madalla, on the outskirts of Abuja, killed 37 people in 2011, although the main suspect in that attack is now behind bars. Boko Haram also claimed responsibility for a bomb attack on the United Nations’ Nigeria headquarters that killed 24 people on August 26, 2011.

Boko Haram, which in the Hausa language of largely Muslim northern Nigeria means broadly “Western education is sinful”, is loosely modelled on the Taliban movement in Afghanistan, and has forged ties with al Qaeda-linked militants in the Sahara.

in Abuja in the past two years was probably thanks to a crackdown on Boko Haram, which had largely contained the group in the northeast.

He also said that if this bomb was the work of Boko Haram, the choice of target on the outskirts of Abuja, rather than the city centre, may be a sign of constraints on its capabilities.

“The security provision in the centre appears to be much better than on the outskirts. It’s far easier to target that side of the city,” he said, but he added that the attack may be a forewarning of more ambitious strikes to come.