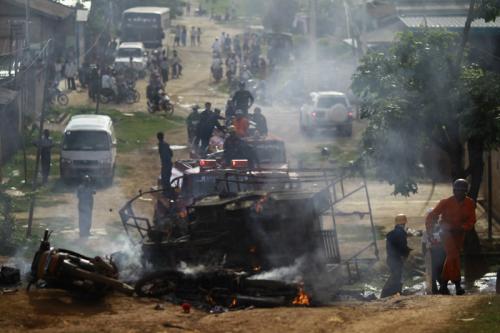 PHUKET: Security forces struggled to control Buddhist mobs who burned Muslim homes on Wednesday for a second day in the northern Myanmar city of Lashio in a dangerous widening of ultra-nationalist Buddhist violence.

Scores of young men and boys on motorbikes and on foot marauded through the city of 130,000 people, some singing nationalist songs, a day after a mosque and religious school were torched.

One person was killed and four were wounded in fighting, Ye Htut, spokesman for President Thein Sein, said in a Facebook post. Police fired guns to disperse the crowds, he said.

The violence in this city in a mountainous region near Myanmar’s northeastern border with China, about 700 km (430 miles) from the commercial capital Yangon, shows how far anti-Muslim anger is spreading in the Buddhist-dominated country.

The religious unrest erupted in western Rakhine State last year and spread into the central heartlands and areas near Yangon this year.

The unleashing of ethnic hatred since 49 years of military rule ended in March 2011 raises questions over whether the reformist Thein Sein has full control over security forces as Myanmar sees its most dramatic changes since a coup in 1962.

By early evening, Muslims shops and homes were still burning in one quarter of Lashio. There was no sign of Muslim residents.

“I don’t know where the Muslims are. They all ran away,” said Kyaw Soe Win, a Buddhist resident of the mixed neighbourhood where motorbikes and household possessions lay burning in the streets. Nearby, a man with a sword and a stick combed through the remains of a burned-out shop.

In other regions, such as Rakhine State where hundreds were killed last year, and in the central city of Meikhtila where at least 44 people died in March, there have been signs of ethnic cleansing, and of impunity for those inciting it.

Lashio is a test of whether the government can bring the widening anti-Muslim unrest under control.

As in Meikhtila, journalists were attacked. Two freelance reporters working for The Democratic Voice of Burma (DVB) were beaten as a mob looted a restaurant, the Norway-based broadcaster said. Memory cards from their cameras were taken.

“I got beat up and left with a bleeding head and my colleague also took a hit on the back. We were just watching the situation with cameras around our necks when a large group of people arrived on motorbikes and started attacking us,” one of the reporters was quoted by DVB as saying.

State television said a mosque, a Muslim religious school and a number of shops were gutted by fires started on Tuesday by Buddhists who rampaged after hearing reports of a Muslim man setting a Buddhist woman on fire and badly wounding her. State media said calm had returned by Wednesday.

Myanmar, where Muslims make up about 5 percent of the 60 million population, has struggled with the unrest since June last year when fighting between ethnic Rakhine Buddhists and Muslim Rohingya erupted in western Rakhine State.

British tourist Stephen Barker, 46, told Reuters he saw a group of about 100 machete and stick-carrying youths rallying around his hotel in the early afternoon, including four or five monks. Police and military moved them on and arrested half a dozen people.

“I got a light for my cigarette from one and he told me to kill all Bengalis while waving this 18-inch blade around.”

Tuesday’s unrest in Lashio was sparked by a quarrel between two people, named by state media as Aye Aye Win, 24, a Buddhist woman who sold petrol, and Ne Win, a Muslim man aged 48.

MRTV television said Ne Win poured petrol over Aye Aye Win and set her on fire. She was in hospital, it said.

After police detained Ne Win, Buddhists surrounded the police station and demanded he be handed over. When they refused, the crowd went on the rampage, attacking Myoma Mosque near Lashio market, residents said.

The authorities attempted to restore order late on Tuesday by banning unlawful assembly under a state of emergency. That’s a faster response than in Meikhtila, where it took three days of fighting before such an order was imposed.

PHUKET: A U.S. soldier accused of killing 16 Afghan civilians in two rampages from his Army post last year has reached a plea deal with prosecutors to avoid the death penalty, one of his lawyers said on Wednesday.

Robert Bales, a decorated veteran of four combat tours in Iraq and Afghanistan, is accused of gunning down villagers, mostly women and children, in attacks on their family compounds in Kandahar province in March 2012.

Lawyer Emma Scanlan said in an email he would plead guilty to premeditated murder charges and would then go before a military jury for sentencing to determine whether a life prison term for his crimes would include the possibility of parole.

“There will be a jury for the sentencing phase beginning in August,” Scanlan said.

Army prosecutors have said Bales acted alone and with chilling premeditation when, armed with a pistol, a rifle and a grenade launcher, he left his base twice in the night, returning in the middle of his rampage to tell a fellow soldier: “I just shot up some people.”

The shootings marked the worst case of civilian slaughter blamed on a rogue U.S. soldier since the Vietnam War and further eroded strained U.S.-Afghan relations after more than a decade of conflict in that country.

Defence attorneys have said Bales was suffering from post-traumatic stress disorder (PTSD) and a brain injury even before his deployment to Afghanistan.

Bales is to enter a guilty plea on June 5 at Joint Base Lewis-McChord, a military installation in Washington state. The judge and a commanding general must still approve the deal.

Vincent and Bruno tie the knot, a first in France
Reuters / Phuket Gazette

PHUKET: Two men married each other in the southern French city of Montpellier on Wednesday, in the first same-sex wedding in a country rocked by protests against and for the reform.

Vincent Aubin and Bruno Boileau exchanged vows in the city hall before the mayor, relatives and friends as dozens of riot police stood guard outside to ensure the ceremony was not interrupted by protestors.

The two men, who have been together since they hit it off six years ago discussing music in an online forum, embraced to wild cheers from the audience of some 500 people and the strains of “Love and Marriage” by U.S. crooner Frank Sinatra.

“It’s a great pleasure for me to declare you married by law,” said Montpellier Mayor Helene Mandroux as the couple, both dressed in dark suits, kissed and signed the marriage registry.