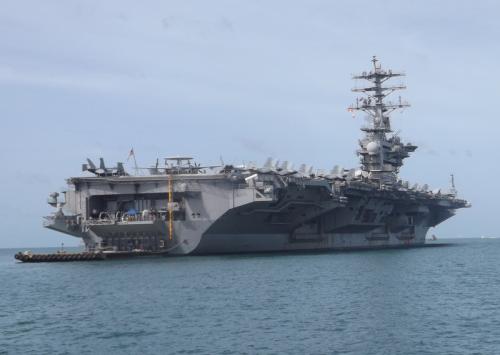 UPDATE: This story has since been updated through the stories ‘No blockade: Phuket taxis called to the rescue [Video Report]’ (click here) and ‘US Navy transport contractor reaches agreement with Phuket taxis’ (click here).

PHUKET: Taxi drivers have set up a blockade at Phuket’s Deep Sea Port, where the USS Nimitz and the USS Princeton are anchored.

According to reports, a contract dispute between rival taxi companies has led to the blockade.

A significant amount of money is at stake, with over 6,000 US Navy sailors in Phuket to enjoy shore leave.

When the USS Ronald Reagan was in port two years ago, some taxi drivers were reported to be asking sailors for up to 6,000 baht for the trip to Patong (story here).

In June 2010, American sailors on three ships were subjected to another taxi blockade. That time, the sailors had been provided free transportation (story here).

That dispute ended when the drivers agreed with military, police and Wichit Municipality negotiators to return to an old agreement allowing the local taxis access to low-ranking US military personnel while only officers could take advantage of the free van service provided by an outside contractor.

The Phuket Gazette understands that Phuket Marine Office chief Phuriphat Teerakulpisut and a delegation from the Phuket Governor’s Office is en route to the Deep Sea Port to resolve the situation.