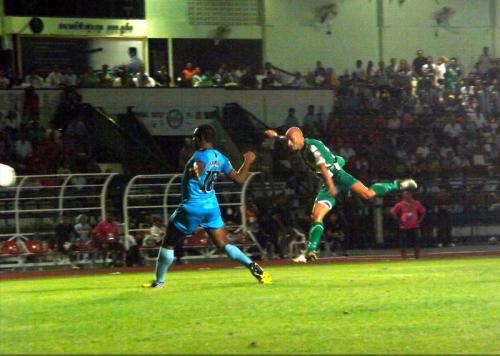 PHUKET: The Islanders advanced to 4th place of the 18-team Yamaha League One (YL1) after downing Krabi FC in a Phang Nga Bay derby match last night in Phuket Town.

Despite Krabi dominating the attack early on, the two Southern sides went into the locker rooms at half time scoreless.

The deadlock was broken eight minutes into the second half, with Phuket’s skilled French midfielder, Geoffrey Doumeng beating the keeper with a fantastic strike – his 3rd of the season. The home team doubled their lead 20 minutes later, with Chana Sonwiset, scoring his second of the season.

Krabi dropped into 10th place as a result. Meanwhile, 4th place Phuket now travel to play against 11th place Saraburi, an hour northeast of Bangkok, for a Sunday evening match. The Islanders next home match is on July 9 vs 2nd place PTT Rayong.

Other YL1 results last night May 29: