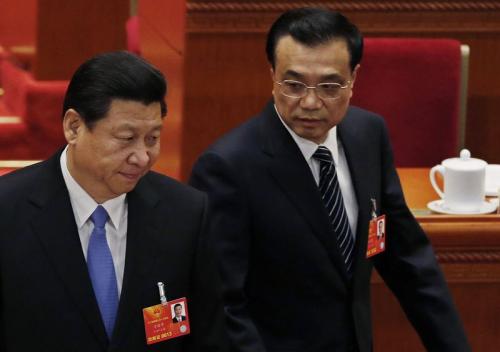 Nearly 3,000 delegates gathered in Beijing’s cavernous Great Hall of the People to vote on Li’s appointment, putting the final stamp of approval on a generational transition of power.

Xi Jinping was elected president by the legislature yesterday.


Saudi Arabia executes 7 men by firing squad
Phuket Gazette / News wires
PHUKET: Seven Saudi men were executed Wednesday after being convicted of carrying out an armed robbery and breaking into jewellery stores, the country’s interior ministry said. The executions were carried out by firing squad, not beheading as is customary.

A statement from the Saudi Interior Ministry said the executions took place in Abha, the capital of southern Asir province, on early Wednesday morning. Witnesses said the executions happened at a public square and were carried out by firing squad, just days after local news reports suggested that authorities were considering to move away from the customary beheadings.

The group of men, who were all in their early 20s when they were executed on Wednesday, were arrested in 2006 and charged with organizing a criminal group, armed robbery and raiding and breaking into jewellery stores in 2005. They were sentenced to death by a court in Abha in August 2009.

Philip Luther, Middle East and North Africa Director at Amnesty International, said the men had previously claimed they were tortured or otherwise ill-treated while held in custody and forced to confess. They also claimed their relatives were threatened with torture if they withdrew their confessions.

“We oppose the death penalty in all circumstances, but this case has been particularly shocking,” Luther said. “It is a bloody day when a government executes seven people on the grounds of ‘confessions’ obtained under torture, submitted at a trial where they had no legal representation or recourse to appeal.”

The executions took place despite an urgent appeal from the United Nations (UN) to the Saudi government just hours earlier, expressing concern about the trials. It is believed the defendants only made made brief appearances before court and were not allowed to speak or give adequate opportunities to conduct their defense. The defendants also said they were not allowed to attend any of the appeal stages and had no defense counsel representing them.

“These serious failings in the process, if confirmed, would constitute violations of international safeguards in the use of death penalty, especially those related to the right to a fair trial and the right to appeal,” UN High Commissioner for Human Rights Navi Pillay said on Thursday.

It is believed at least two of those executed were juveniles at the time of the alleged crime, raising further concern. “These executions are yet another example of Saudi Arabia’s complete disregard of international human rights standards,” said Eric Goldstein, deputy Middle East director at Human Rights Watch. “Saudi authorities need to uphold their human rights obligations and cease these horrifying executions of juvenile offenders.”

Saudi authorities had initially scheduled the executions for March 5, but they were postponed earlier this year after an international outcry over the circumstances of the case. The government had said the royal court would review the allegations of the defendants, but it is unclear if such a probe took place or what the outcome was.

At least 24 people have been executed in Saudi Arabia so far this year. The kingdom applies the death penalty for a large number of crimes, including drug offences, apostasy, sorcery and witchcraft. Both witchcraft and sorcery are not defined as crimes in Saudi Arabia, but human rights organizations say such charges have previously been used to prosecute people for exercising their right to freedom of speech or religion.

The first task of the 630 lower house deputies and 315 senators will be to elect the speakers of the two houses. The outcome of the votes for these influential roles could give an indication of the prospects for a stable administration.

The election produced a hung parliament, with the centre-left winning control over the lower house Chamber of Deputies but not of the Senate, which has equal legislative powers.

If the anti-establishment 5-Star Movement, which holds the balance of power, agrees to do a deal over the parliamentary speakers with the centre-left Democratic Party (PD) it may pave the way to a broader agreement on the formation of a government.

Since the election 5-Star, led by comedian Beppe Grillo, has rebuffed repeated invitations by PD leader Pier Luigi Bersani to govern together.

Despite doing better than expected in the vote, Silvio Belusconi’s centre-right has been politically sidelined because both Bersani and Grillo rule out any deal with the former prime minister who has also been beset by legal problems.

However, this could still change if Bersani and Grillo fail to come to terms and President Giorgio Napolitano tries to broker another broad, right-left coalition like the one that backed outgoing technocrat Prime Minister Mario Monti.

Napolitano will begin consultations with party chiefs over the new government on March 19.

While the election failed to produce a clear result, it did yield what has been hailed as a positive change of direction in terms of the relative youth of the parliamentarians elected and a big increase in women.

It will be by far the youngest parliament in Italy’s history, thanks largely to 5-Star’s 163 deputies and senators, none of whom have any previous parliamentary experience.

Overall, the lawmakers’ average age of 48 is still lower than that of their counterparts in Germany, France, Spain, Britain and the United States, while the proportion of women has jumped to around 31 percent from 20 percent previously.

Voting for the two speakers begins at 0930 GMT in the lower house and 1000 in the Senate. The majority required diminishes after each inconclusive ballot.