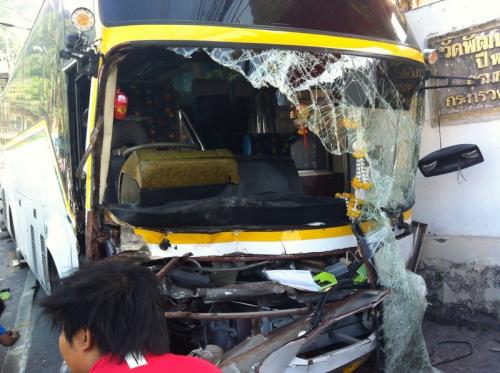 PHUKET: One person is dead after a Phuket tour bus slammed into eight motorbikes and five cars on Patong Hill this morning.

Athiwat Petchsai, 22, died after he was struck by the runaway bus in front of Wat Patong temple (map here) after the vehicles’ brakes failed as it descended Patong Hill at about 7:30am.

The bus was en route from Phuket Town to pick up tourists staying at a hotel in Patong.

Nine others were reported injured, including the bus driver, Thammanoon Pinkongphan, 35.

Three of the injured were rushed to Vachira Phuket Hospital in Phuket Town.

The remaining five were taken to Patong Hospital.

Mr Thammanoon was taken to Bangkok Hospital Phuket for treatment after he suffered injuries to his chest, knee and wrists when the tour bus plowed into the temple wall.