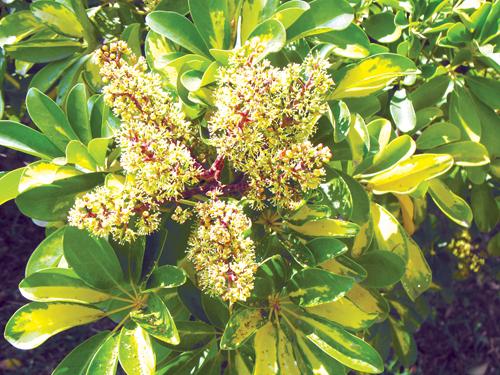 PHUKET: If you strolled round the average Phuket garden with the proud owner, he might be forgiven for protesting: “What, do you want yet more foliage plants!?”

But remember that at this time of year, apparently evergreen trees and shrubs start to drop leaves in an attempt to conserve energy, and prevent excessive water loss through transpiration.

Others simply give up the ghost. So when patches of bare soil do inevitably appear, there is nothing better than colorful and evergreen foliage to paper over the cracks.

Schefflera arboricola, a native of Taiwan, is ideal for this purpose. Often grown as an indoor plant – testament to its hardiness – schefflera is a bushy, evergreen variegated shrub that will not only thrive in hot, dry conditions, but will also cope with the absence of direct sunlight. Full shade will probably mean the loss of the yellow and green patterning, but it will probably survive.

Oddly, it is related to the ginseng, a plant whose dried root was much favored by oriental gentlemen before they discovered the more exotic and costly delights of powdered rhinoceros horn, tigers’ testicles and other quaint and useless aphrodisiacs.

But I digress. More to the point, schefflera has stylish leaves composed of rounded, glossy leaflets arranged in a whorl and held on long stems. Hence its common name of umbrella plant.

It makes a big, dense bush and in the right conditions, can reach six or seven feet. I have a specimen in a large ceramic pot, which was strategically placed in order to camouflage an unsightly plastic water tank in the garden beyond. Already it has more-or-less blotted the tank from our view. “Jacqueline” is a newer cultivar, with dramatic blotches of bright yellow and green foliage. Every leaf has a different pattern of variegation.

As with the majority of foliage plants, the flowers of scheffera are relatively unmemorable, but S actinophylla bears small red flowers on arresting spikes, which radiate outwards.

Rich in nectar, these flowers act as a magnet for bees and butterflies.

Talking of camouflage, I always think that my next foliage plant, the so-called ‘caricature plant’, might be more accurately described as the camouflage plant. Why? Because its leaves are blotched with buff yellow and green, in exactly the same way as the “military” gear much favored by today’s fashion-conscious youth.

Native to the South Pacific, graftophyllum pictum, to give it the full botanical treatment, is less bushy than the umbrella plant and has a narrower and more erect habit. The conventional and often wavy leaves, moreover, are large, elliptical and sprout from opposite sides of each stem.

Many cultivars have been developed over the years, so the original blotched khaki look has been superceded by varieties sporting more exotic attire – purple/bronze, deep-green mingled with white, yellow, pink and purple.

It may almost be said to rival the acalypha or ‘Jacob’s Coat’ in its startling range of unusual hues.

But remember to propagate from cutting if you want to ensure the same color variations in succeeding generations.

There is an Australian species, excelsum, which, strictly speaking does not belong here.

Grown primarily for its profuse blooms, the scarlet fuchsia bush has dark green, glossy leaves and deep red and curved tubular flowers produced in the leaf axils. Apparently it is very hardy and grows freely to tree height among limestone outcrops in Queensland.

I have only seen one specimen in a Phuket garden – a pity, since it should do well in this amenable climate.

How many times have I said that.

My guess, which proved to be correct, was that these were varieties of monarchs – probably tigers – that were using the shrub to feed off the nectar, and to deposit their eggs.

The plant favored by these butterflies is the Indian milkweed (calotropis gigantia) which produces large, grey-green leaves, the favorite diet of monarch caterpillars.

Personally, I grow this shrub/small tree for a range of reasons. It not only provides leafy food for beautiful-to-be butterflies, but also, has dense clusters of white or purplish, crown-shaped florets, which are a fragrant source of nectar. The flowers are, moreover, long-lasting, a reason why they are used in floral garlands. The shrub is extremely hardy and is one of the easiest to strike from cuttings.