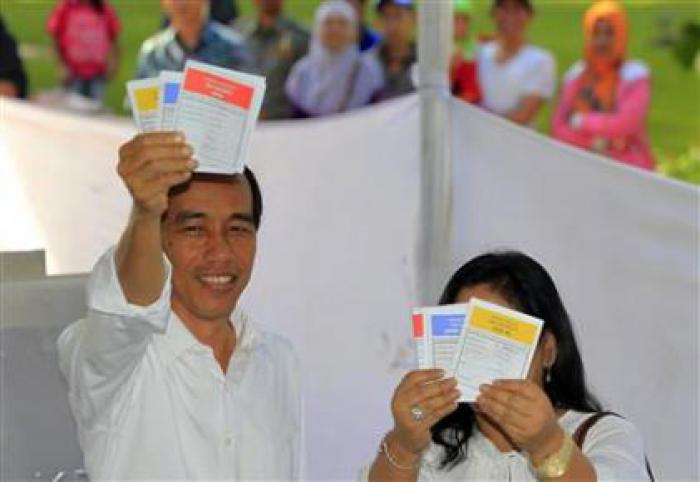 PHUKET: Indonesia’s likely next leader may have a bumpier-than-expected route to the presidential palace after early counting in Wednesday’s parliamentary vote suggested his party will have to cut a deal with other parties to get him there in a July poll.

Early counts by pollsters show that the Indonesian Democratic Party-Struggle (PDI-P) failed to win enough votes to nominate on its own hugely popular Jakarta governor Joko “Jokowi” Widodo for the powerful presidency.

News that PDI-P did not fare as well as opinion polls predicted, even though it was still in front, put pressure on the rupiah in late offshore trading. The prospect of a Jokowi presidency has helped lift both the currency, Asia’s best performer this year, and shares.

In another surprise, Islamic parties looked to have picked up more support than expected. Though Indonesia is home to the world’s largest Muslim population, many analysts thought Islamic parties were on the wane because of graft scandals and the greater popularity of more pluralist parties.

“Parliament is likely to be very fragmented because many parties have gotten a relatively big share of votes, and their bargaining power will be pretty much the same,” said Philips Vermonte, political analyst at Jakarta-based think-tank CSIS.

“This will have a big influence on the new president because he’ll have to pay attention to the situation in parliament and the many political players there.”

A party needs 25 percent of the national vote, or 20 percent of seats in parliament, to nominate a presidential candidate on its own. Less than that and the PDI-P will need to form a coalition with one or more of the other 11 parties in Wednesday’s election to nominate Jokowi.

After 80 percent of vote results were compiled by CSIS from 2,000 polling booths across the world’s third largest democracy, PDI-P had just 19 percent of the vote.

The election commission has not released any vote counts. The way seats are apportioned means PDI-P could still end up with enough seats to nominate a presidential candidate without being forced into trade-offs with other parties.

“The disappointing thing for observers and investors who are looking for more certainty is that an unwieldy coalition might not give them that.”

But he added: “Far and away Jokowi still the most popular candidate. Some polls still saying he has 40 percent support. So it’s definitely still his (presidential) election to lose.”

“Hopefully … PDI-P will able to meet target of above 20 percent, so we can nominate Joko Widodo as presidential candidate,” said Puan Maharani, daughter of party chief Megawati Sukarnoputri.

The quick count also showed that the five Islamic parties in the race had won 32 percent of the vote, up from 29 percent for the eight such parties that contested the 2009 election.

Indonesia’s embrace of democracy since the downfall of former authoritarian leader Suharto 16 years ago has seen four different presidents and repeated change of the leading party.

Campaigning has been notable for its lack of policy initiatives to give the economy a boost. Growth is expected to be a little more than 5 percent this year, but has weakened partly on the fall in prices for commodities that still form a backbone for the resource-rich economy.

Jokowi has offered little clue to his policies but his popularity rests heavily on his no-nonsense style in running the capital, demanding his bureaucrats perform their jobs properly and by focusing many policies on improving the lives of ordinary Jakartans.

The two main parties behind PDI-P, were Golkar, one-time parliamentary vehicle of the long-serving Suharto, and Gerindra which is led by ex-general Prabowo Subianto.

Early results suggest both will struggle to meet the threshold to contest the presidency, suggesting there will be intense horse-trading to form coalitions.

Backing for the ruling Democratic Party of outgoing President Susilo Bambang Yudhoyono has fallen to single digits after it was hit by a series of graft cases last year. Yudhoyono is limited by the constitution to two terms.

Yudhoyono is Indonesia’s first leader to be chosen by direct election.

“Even though we are still fixing and perfecting the system of holding these (elections), once again Indonesia can be grateful because our democratic journey is going the right way,” he told reporters.

Voters, nearly a third of them under 30, chose between 6,600 candidates vying for national parliament seats. Elections were also held for 19,007 provincial and district legislative assembly seats.

Most Indonesians view parliament as among their country’s most corrupt institutions, according to a 2013 Transparency International survey. Under the presidential system, however, the executive branch has the authority to overrule it.