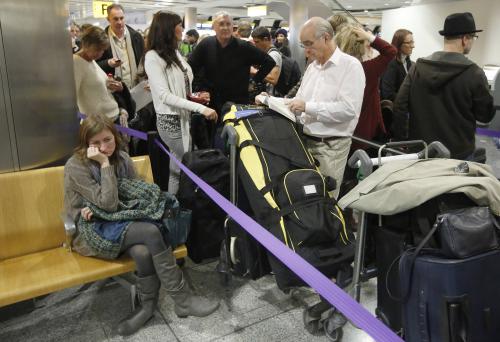 
EU lawmakers push to bolster rights of stranded air travellers
Reuters / Phuket Gazette
PHUKET: The European Parliament has called for stricter rules to make it easier for stranded air passengers to claim compensation from their airlines.

The lawmakers’ vote on Wednesday takes Europe closer to tightening rules on compensation, by limiting the exemptions for airlines that result in payouts for a flight delay or cancellation being rare.

Under the proposed rules, a delay could trigger compensation of up to 600 euros (about 26,600 baht), depending on the length of time involved and flight distance.

The revised rules, which would apply across the 28 countries in the European Union, would require airlines to have staff to inform passengers about their rights, as well as laying out procedures for complaints and reimbursements.

“It’s a David versus Goliath story, as only 2 percent of passengers actually get compensation after filing a complaint against an airline,” said Georges Bach, the lawmaker responsible for steering the legislation through parliament.

Airlines that fail to reply to a complaint within two months would be deemed to have accepted the passenger’s claims.

Airlines facing exceptional circumstances, such as political unrest, would be exempted from paying, but they would have to give passengers a full written explanation.

Airlines’ obligation to provide accommodation would be limited in the event of long-running problems, such as the volcanic ash cloud in 2010.

A spokesman for consumer group Beuc said that more needed to be done to enforce existing rules. It welcomed the move to stop the practice of cancelling the return leg of a flight where the passenger failed to turn up.

Siim Kallas, the European Union commissioner for transport policy, said the new rules should ensure that “passenger rights do not just exist on paper”.

“Our focus is on information, care and effective re-routing,” he said.

The new law is likely to come into force next year, after negotiations with the EU countries are concluded.