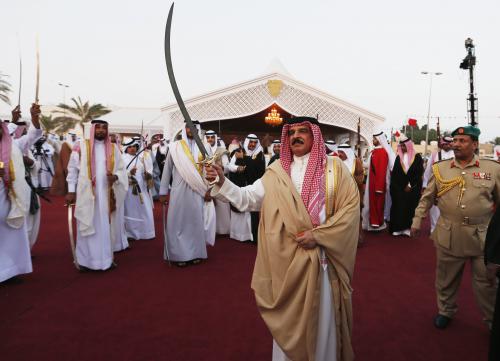 
Bahrain toughens penalties for insulting king
Reuters / Phuket Gazette
PHUKET: The king of Bahrain has approved a law imposing a jail sentence of up to seven years and a fine of up to 10,000 dinars (16,276.64 pounds) for anyone who publicly insults him.

King Hamad’s measure highlights the sensitivity of Bahrain and other Gulf Arab states to criticism of senior officials and ruling family members as well as to political dissent. Courts in Kuwait and Qatar have imposed jail terms on several nationals for insulting their rulers in past years.

The new law, reported by the state Bahrain News Agency on Tuesday, says the penalties apply to “whoever has insulted, in any kind of public manner, the king of Bahrain, or its flag, or its national emblem”.

A previous law stipulated that anyone who “offends the Emir of the country, the national flag or emblem” would be jailed, but did not set a term. Under the penal code, any prison term must last 10 days to three years unless otherwise specified.

Bahraini lawyer Jalila Sayed told Reuters the new law stipulated a tougher prison sentence of one to seven years as well as a fine of 1,000 to 10,000 dinars for insulting the king.

The Gulf Arab island is a U.S. ally which has long provided a base for the U.S. Navy’s Fifth Fleet. It has faced increasing criticism over its human rights record in the past three years.

Sunni Muslim-ruled Bahrain has been shaken by persistent unrest since mostly Shi’ite Muslim demonstrators took to the streets in February 2011 to call for greater democracy.

Stalled reconciliation talks between the Sunni ruling family and the Shi’ite opposition were recently revived after the intervention of Crown Prince Salman bin Hamad al-Khalifa, seen as a relative moderate in the royal family.

But mistrust between the Shi’ite opposition and the Saudi-backed al-Khalifa family remains high three years after the authorities quelled the initial wave of protests.

Demonstrators still frequently clash with police in Bahrain, which is caught up in a regional struggle for influence between Shi’ite power Iran and Sunni heavyweight Saudi Arabia.