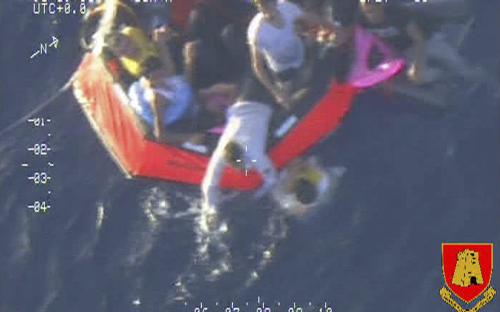 PHUKET: Dozens of people died on Friday when a boat carrying around 250 migrants capsized between Sicily and Tunisia, in the second such shipwreck this month, the Italian coastguard said.

The Italian news agency ANSA reported that around 50 corpses had been sighted, including around 10 children, following the incident about 60 miles (100 km) south of the tiny island of Lampedusa.

Maltese Prime Minister Joseph Muscat told a news conference in Valletta there were indications at least 27 people had died “and the number is expected to rise, possibly drastically”.

At least 339 people drowned on October 3 when a boat carrying Eritrean and Somali migrants sank near Lampedusa, southwest of Sicily.

The Maltese navy said one of its ships had rescued 150 migrants from Friday’s wreck and an Italian navy vessel had saved 56. The most seriously injured were being taken by helicopter to Lampedusa.

Maltese authorities were coordinating the rescue operation, which was in international waters but in a Maltese rescue zone, and a Maltese ship was on the scene, a spokesman for the island state’s navy said.

The boat was spotted in difficulty by a Maltese military plane at around 1400 GMT, which dropped a liferaft.

“This is not just another wake-up call for Europe. This is the time for action,” Muscat said, adding he had spoken to Italian Prime Minister Enrico Letta to discuss the latest disaster.

“This is a European problem, not a problem for Italy or Malta only.”

Italy is asking for more European Union support and an overhaul of the bloc’s immigration rules after last week’s shipwreck.

Last week’s disaster was one of the worst in a protracted migrant crisis in which tens of thousands of people have arrived in flimsy, overcrowded boats in southern Italy, and some vessels wrecked. Lampedusa, midway between Sicily and Tunisia, has borne the brunt.

According to the U.N. High Commissioner for Refugees, 32,000 have arrived in southern Italy and Malta this year alone, around two thirds of whom have filed requests for asylum.

Earlier on Friday at least 500 more migrants in at least three separate boats arrived or were rescued on the way to different areas of Sicily.

Most migrants come from sub-Saharan Africa, but this year many are fleeing the civil war in Syria or political turmoil in Egypt and other parts of North Africa. Many are drawn by hopes of finding work in Europe and often do not stay in Italy.

PHUKET: President Barack Obama and congressional Republican leaders inched toward resolving their fiscal impasse on Friday, but struggled to agree on the length and terms of a short-term deal to increase the U.S. debt limit and reopen the government.

Obama met Senate Republicans at the White House and spoke by phone to House of Representatives Speaker John Boehner as negotiations intensified on how to get hundreds of thousands of federal workers back on the job and extend the government’s borrowing authority past the October 17 limit.

It was hard to gauge the progress of talks, as all sides refused to divulge many of the specific details of what is being discussed.

But both sides spoke with new optimism about the possibility of avoiding a fiscal crisis. Lawmakers were expected to work through the weekend with a goal of finishing a deal by early next week.

Economists have warned that a debt default would create global economic chaos, and analysts warned on Friday that if the shutdown lasts more than a month it would cause a sharp slowdown in fourth-quarter economic growth.

Obama wants the debt ceiling raised for longer than the six weeks first proposed by Republicans, and Republicans want a commitment to broader deficit-reduction talks from the White House.

“The two of them agreed that all sides need to keep talking,” White House spokesman Jay Carney told reporters after the call between Boehner and Obama. “It at least looks like there is a possibility of making some progress here.”

House Republicans will meet at the Capitol on Saturday morning to discuss their options after sending the White House a proposal that included the short-term increase in the debt limit that would clear the way for re-opening the government.

The House Republican proposal called for cuts in entitlement programs like the Medicare health plan for seniors to replace two years of the automatic spending cuts known as “sequestration” agreed to last year by Congress, senior aides said.

“The good thing is the negotiations are ongoing. That is much more progress than has been the case lately,” House Majority Leader Eric Cantor of Virginia said.

But Carney said the short-term increase proposed by Republicans would not provide enough certainty for the economy and would put the country back on the verge of default during the end-of-year holiday season.

“A debt ceiling increase at only six weeks tied to budget negotiations would put us right back where we are today in just six weeks, on the verge of Thanksgiving and the obviously important shopping season leading up to the holidays,” Carney said.

At a White House meeting with Senate Republicans on Friday, Obama expressed concerns the proposed debt-limit extension was too short and also talked about the need for new revenues as part of any long-term deficit reduction plan, Republican Senator Orrin Hatch of Utah said.

Large portions of the U.S. government shut October 1 after Obama and Democratic lawmakers rejected House Republicans’ demands for delays to Obama’s healthcare reforms in exchange for temporary government funding. The fight has since shifted to the debt limit and spending on other programs.

Hatch said he left the meeting feeling the fiscal fight will still be a “difficult experience.”

But Senator Bob Corker, a Republican from Tennessee, said senators “had to leave there knowing that probably in the very near future we will have these issues behind us.”

The new sense of optimism sent U.S. stocks higher on Friday, extending gains from a major rally in the previous session. But U.S. Treasury bills maturing in late November and throughout December spiked as banks and major money market funds shy away from holding debt with any risk of delayed interest or principal payments.

“If the shutdown lasts through the end of October, the economic damage would be significant, reducing real GDP as much as 1.5 percentage points in the fourth quarter,” said Mark Zandi, chief economist at Moody’s Analytics in West Chester, Pennsylvania.

An unlikely coalition of the heads of the U.S. Chamber of Commerce, AFL-CIO labour federation and United Way Worldwide joined together on Friday to warn about the dangers of a prolonged economic impasse.

“While we may disagree on priorities for federal policies and we even have conflicting views about many issues, we are in complete agreement that the current shutdown is harmful and the risk of default is potentially catastrophic for our fragile economy,” they wrote in a letter to Obama and members of Congress.