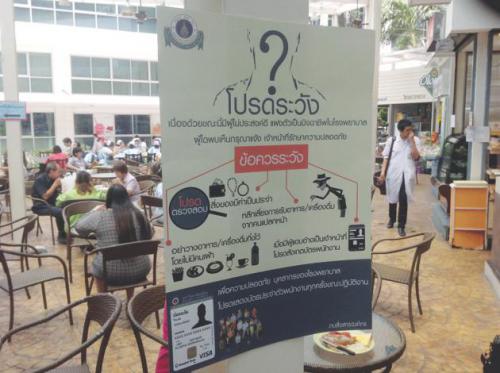 PHUKET: “Watch out!” the Public Health Ministry is warning all hospital users nationwide, after the recent sedation of a number of patients at major Bangkok hospitals when they unwittingly ingested a dangerous drug.

Hospitals around the country have been urged to tighten security measures to prevent a gang of thieves suspected of having stolen patients’ belongings – as well as the property of visiting relatives – after offering them “doctored” water that renders them unconscious.

The warning comes after the Medical Services Department (MSD) received a report from Ramathibodi Hospital that members of a gang had lured patients and their relatives in the outpatients’ ward into drinking water that they were offering “as a gesture of hospitality”.

However, the water had been mixed with the colourless and odourless sedative and muscle relaxant Xylazine and, after the victims fell unconscious from drinking the toxic liquid, the robbers stole their property.

The MSD said that use of the drug – generally administered by veterinarians for sedating and anaesthetising animals – could place a patient or other human user at risk of death.

Phayathai police investigator Pol Lt-Colonel Banyong Dammankong yesterday said that since the beginning of the month, at least three people had reported being robbed in this way at three hospitals: Ramathibodi, Priest and Rajavithi. After investigating a suspected perpetrator who appeared on closed-circuit television at Ramathibodi Hospital, he has issued an arrest warrant for a 30-year-old man for theft of a patient’s property using such a method.

“This suspect had been pretending to offer hospitality and friendship to patients and their relatives, after which he would ask them to drink the mixed water to make them unconscious, before steal belongings such as mobile phones,” Banyong said.

The investigator said he had also sent a team of police to search for other gangs that might use the same method to rob people at other hospitals.

Meanwhile, MSD director-general Suphan Srithamma said he had instructed medical workers at state hospitals across the country to keep a close watch in outpatient wards for strangers who might be members of such a gang. “Patients who are not able to take care of themselves would be at [particular] risk of theft by these gangs,” he said.

Xylazine is a drug used for sedation, anaesthesia, muscle relaxation and analgesia in animals such as horses, cattle and other non-human mammals.

According to the Food and Drug Administration (FDA), it is registered and classified as a dangerous medicine. People are allowed to buy the drug without a doctor’s prescription, as it is intended for non-human use.

Generally, veterinarians inject Xylazine into an animal’s blood vessel. About five minutes after receiving the drug, the injected animal will become sedated and anaesthetised.

It will be under the influence of this drug for about 20 minutes, during which surgery can be performed.

Meanwhile, in humans, anyone taking the drug would become sleepy and develop a change in blood pressure. Affected people would breathe slowly and have high a level of sugar in their blood, as well as a very dry mouth.

To alleviate the toxin in the drug, anyone who ingests Xylazine is advised to see a doctor immediately and to take Yohimbine, which is used to increase peripheral blood flow.

Meanwhile, Ramathibodi Hospital has issued an announcement to warn patients and their relatives that there is a gang at large pretending to be medical staff, but intent of stealing their valuables.

They are urged not to receive food or water from any strangers, and not to leave their food and drink unattended.

In a development reported late yesterday, a Ramathibod Hospital official said the latest drugging incident had been reported during the morning.

“The victim is a hospital official,” she said. The incident took place in Building 1, but the victim did not lose any belongings, she said, without elaboration.

It was the biggest quake ever felt in the district.

“The earthquake was so powerful that we felt like a big truck had come crashing into our building,” said Phra Khru Preechapiwat, abbot of Thung Luang Temple. He is also in charge of the Phrao District Rescue Centre.

The incident did not kill or injure anybody and no damage was recorded as per the latest official survey.

Students take over rally at Urupong
The Nation / Phuket Gazette

PHUKET: Student activists have taken over the anti-government rally at Urupong intersection, saying the protest will continue despite the Molotov cocktails that were hurled at their tents early yesterday morning.

Utai Yodmanee, president of Ramkhamhaeng University Students Organisation, announced yesterday that the rally at Urupong intersection would be led by his group called Students’ and People’s Network for Thailand’s Reform. He said there was no definite date for the protest to end, adding that he had a plan in place should the government decide to stretch the Internal Security Act to cover the protest venue.

On Thursday, members of the People’s Army to Overthrow Thaksin’s Regime decided to move out of the area surrounding Government House to relocate to Lumpini Park – a decision that made several participants unhappy. Then the group decided to start congregating near the Nang Lerng area before moving on to Urupong intersection, which is not covered by the ISA.

Meanwhile, Deputy Prime Minister Pracha Promnog blamed a “third party” for trying to stir trouble by hurling the explosives, adding that the ISA will continue in light of this attack. He added that he wasn’t considering expanding the scope of the ISA to Urupong intersection and that he was waiting for an official assessment of the situation.

Pracha said Prime Minister Yingluck Shinawatra has issued instructions that tight security measures be put in place for the duration of the Chinese PM’s visit.

At about 2am yesterday, several Molotov cocktails made in bottles of energy drinks were hurled at the protesters’ tents from a passing car. The attackers also threw down handbills reading “you make traffic jams, you should find a new area for your rally”.

The bombs damaged a taxicab and injured two guards. The protesters later installed a green net over the site to protect themselves.

Pracha said it was difficult to protect the rally site because it is located under an expressway, though the police are coordinating with the Expressway Authority of Thailand and have asked for CCTV camera footage to help hunt down the bombers.

Police said the bottle bombs were only filled with paraffin oil and didn’t contain any explosives so it was likely that the bombers only wanted to bully protesters.