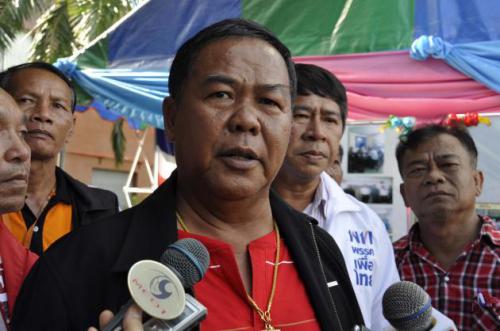 Kwanchai, a local radio presenter, has played an active role in mobilising supporters of the United Front for Democracy Against Dictatorship (UDD) in the Northeast.

Kwanchai was reading a newspaper in front of his home near the Khon Rak Udon group radio station at 10am when at least two assailants in a pick-up truck fired 42 bullets at him with an AK-47 assault rifle from about 100 metres outside the fence.

Udon Thani police chief Pol Maj-General Boonleu Korbangyang said the Khon Rak Udon group chairman was wounded in his right arm and leg and taken to Aek Udon Hospital. As red-shirt supporters crowded the hospital to get updates, Kwanchai was reported to be stable and recovering. Police also set up checkpoints on a stretch of road in Nong Khai heading towards the Thai-Lao Friendship Bridge, to which the suspects’ truck was reportedly heading.

Kwanchai had organised several movements and forums in the region to support the February 2 general election in opposition to the anti-government People’s Democratic Reform Committee (PDRC)’s demand for the resignation of the caretaker government and national reform before the election.

Kwanchai has a number of rivals, including several red-shirt groups not under his supervision, and Udon Thani politicians. He also made negative comments recently against senior military officers.

Another red-shirt hard-liner, Yossawaris Chuklom, aka Jeng Dokchik, said Kwanchai’s shooting might be a result of the ongoing political conflict because Kwanchai was very vocal in his opinions.

“I want to tell those behind this attack that we are all Thais. Even though we have different political points of view, there is no need to use violence like this shooting. I think we are in ‘violence mode’, and even I have to be cautious from now on,” he added.


Govt briefs diplomats on aims of decree; US calls for restraint
The Nation / Phuket Gazette
PHUKET: In imposing the emergency decree, the government’s aim is to limit violence and to empower security agencies to maintain peace and public safety – not to quell protests, foreign diplomats were told yesterday.

Foreign Ministry permanent secretary Sihasak Phuangketkeow yesterday invited diplomats from 65 countries and eight international organisations to hear an explanation of the government’s intention in declaring a state of emergency on Tuesday.

“We will continue to exercise prudence and discretion in solving problems and will not deprive the people of their rights,” he said.

He said the government has also requested that the Office of the United Nations High Commissioner for Human Rights send observers to monitor the government’s actions in light of the state of emergency, which he said would adhere to international standards. In a separate development, the United States on Tuesday urged all sides in Thailand to show restraint and refrain from violence as the US ally imposed emergency rule to tackle mass protests.

Washington condemned violence and called for an investigation into incidents including grenade attacks that have killed one person and injured dozens more.

“We urge all sides to refrain from violence, exercise restraint, and respect the rule of law,” US State Department spokeswoman Marie Harf said in a statement.

“We encourage all involved to commit to sincere dialogue to resolve political differences peacefully and democratically.”


PDRC targets EC officials outside capital
The Nation / Phuket Gazette
PHUKET: With the anti-government rally in Bangkok now being held under a state of emergency, People’s Democratic Reform Committee (PDRC) supporters elsewhere, especially in the South, yesterday stepped up pressure on the Election Commission (EC) to call off the general election next month.

Chokchai said some state offices and the community centre would be used as venues. However, applications for running in the constituency MP race could not be completed yet due to the protest.

He said he and other officials were worried that chaos could break out on election day due to protests.

Somchai urged everyone to perform his duty and keep the central office posted about the protest situation until election day for better assessment.

The protesters then called for Somchai to come out in person to accept their request for “reform before election”, and accept a flower basket. However, he sent a representative instead reportedly because his position required him to be impartial. The protesters later marched back to their base in front of Songkhla City Hall.

In the afternoon, Somchai was subjected to more boos and whistles as he inspected preparations for advance voting in Phatthalung and was told by the provincial EC director that some documents went missing because they were forced to move operations three times.

The group reportedly wanted to prevent household-registration officials from distributing voter lists to the 77 polling stations in the district.

The protesters also marched to the provincial offices of the departments of Livestock Development and Irrigation and the Rubber Replanting Aid Fund, as well as the TOT branch in Muang Yala, to seek their closures.

In Nakhon Si Thammarat’s Muang district, schools were shut by protesters, who were joined by students and parents, as well as state offices – except for police stations and hospitals.


Rice row could see Phichit leaders join Bangkok protest
The Nation / Phuket Gazette
PHUKET: Upset at the breakdown of the rice-pledging scheme, local leaders in Phichit are considering joining the People’s Democratic Reform Committee’s anti-government protest to pacify farmers who have not been paid for their crops.

Payments to farmers participating in the ruling Pheu Thai Party’s flagship populist programme have been delayed repeatedly for months.