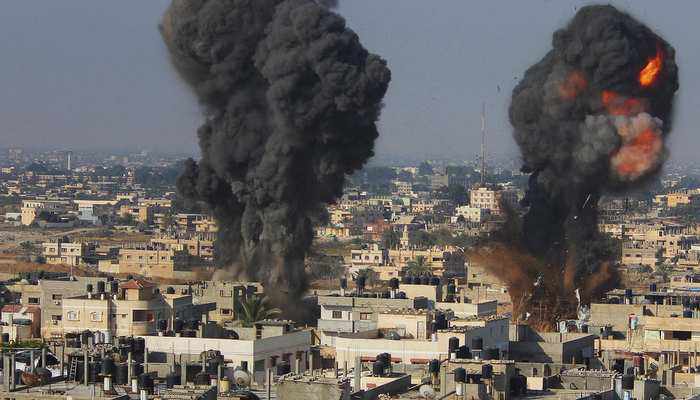 PHUKET: An airstrike outside a family home early Saturday pushed the Palestinian death toll past 100 in four days of cross-border fighting as Israel showed no sign of pausing despite international pressure to negotiate a ceasefire with the militants.

Asked if Israel might move from the mostly aerial attacks of the past four days into a ground war in Gaza to stop militant rocket fire, Prime Minister Benjamin Netanyahu replied, “We are weighing all possibilities and preparing for all possibilities.”

“No international pressure will prevent us from acting with all power,” he told reporters in Tel Aviv a day after a telephone conversation with U.S. President Barack Obama about the worst flare-up in Israeli-Palestinian violence in almost two years.

On Friday Washington affirmed Israel’s right to defend itself in a statement from the Pentagon. But Defence Secretary Chuck Hagel told Israeli Defence Minister Moshe Ya’alon he was concerned “about the risk of further escalation and emphasized the need for all sides to do everything they can to protect civilian lives and restore calm.”

An Israeli airstrike killed five youths and wounded 15 people outside a family home in the Jabalya refugee camp in the northern Gaza Strip early on Saturday, witnesses and medical officials told Reuters.

A rocket seriously wounded one person and injured another seven Israelis when a fuel tanker was hit at a service station in Ashdod, 30 km north of Gaza. Palestinian militants warned international airlines they would fire rockets at Tel Aviv’s main airport.

Medical officials in Gaza said at least 75 civilians, including 23 children, were among 106 people killed in the aerial bombardments that Israel began on Tuesday. They included 12 killed on Friday.

Among the dead was a man described by Palestinian officials as a doctor and pharmacist. A 4-year-old boy was killed when a neighbour’s house was targeted by an Israeli raid, a Palestinian hospital official said. Two other people aged 70 and 80 were killed in a missile strike elsewhere in Gaza, the Palestinian Heath Ministry said.

But Israel said it was determined to end cross-border rocket attacks that intensified last month after its forces arrested hundreds of activists from the Islamist Hamas movement in the occupied West Bank following the abduction there of three Jewish teenagers who were later found killed. A Palestinian youth was killed in Jerusalem in a suspected Israeli revenge attack.

Israel’s campaign “will continue until we are certain that quiet returns to Israeli citizens,” Netanyahu said. Israel had attacked more than 1,000 targets in Gaza and there were “more to go.”

Israel’s military commander, Lieutenant-General Benny Gantz, said his forces were ready to act as needed – an indication of a readiness to send in tanks and other ground troops, as Israel last did for two weeks in early 2009.

Western-backed Abbas, who is based in the West Bank and agreed a power-sharing deal with Gaza’s dominant Hamas in April after years of feuding, called for international help: “The Palestinian leadership urges the Security Council to quickly issue a clear condemnation of this Israeli aggression and impose a commitment of a mutual ceasefire immediately,” he said.

After the failure of the latest U.S.-brokered peace talks with Israel, Abbas’s accord with Hamas angered Israel.

The rocket salvoes by the hardline movement and its allies, some striking more than 100 km (60 miles) from Gaza, have killed no one so far, due in part to interception by Israel’s partly-U.S. funded Iron Dome aerial defence system.

But racing for shelter had become a routine for hundreds of thousands of Israelis and their leaders have hinted they could order troops into the Gaza Strip, a 40-km sliver of coastline that is home to nearly 2 million people. Some 20,000 reservists have already been mobilised, the army says.

Hamas’s armed wing said it would fire rockets at Tel Aviv’s Ben-Gurion international airport and warned airlines not to fly to Israel’s main gateway to the world.

The airport has been fully operational since the Israeli offensive began and international airlines have continued to fly in, with no reports of rockets from Gaza – largely inaccurate projectiles – landing anywhere near the facility, inland of the coastal metropolis. It is within an area covered by Iron Dome.

Fire was also exchanged across Israel’s northern border. Lebanese security sources said two rockets were fired into northern Israel on Friday but they did not know who had fired them. Israel responded with artillery fire. Palestinian groups in Lebanon have often fired rockets into Israel in the past.

Palestinians said Israeli tanks fired shells east of Rafah, ships shelled a security compound in the city of Gaza and aircraft bombed positions near the Egyptian and Israeli borders.

The offensive is the deadliest since November 2012, when around 180 Palestinians and six Israelis were killed during an Israeli air campaign to punish Hamas for missile attacks. That conflict was eventually halted with mediation from Egypt, which was then governed by Hamas’s Muslim Brotherhood allies.

But Egypt, now ruled by the Brotherhood’s enemies, is today locked in a feud with Hamas over the group’s alleged support for militants in Egypt’s Sinai desert – something Hamas denies. Cairo said on Friday its “intensive efforts” with all sides to end the warfare has met only “intransigence and stubbornness”.

Izzat El-Risheq, a Hamas official told Arab television Al-Hadath “there are efforts for a ceasefire,” but demanded Israel stop its offensive before any deal could be reached.

If Israel launches a ground invasion of Gaza, it would be the first since a three-week war in the winter of 2008-09, when some 1,400 Palestinians and 13 Israelis were killed.

The Israeli military said some 550 projectiles have been fired at Israel since Tuesday and that it had targeted some 210 sites in the Gaza Strip over the past 24 hours, among them “long-range rocket launchers, Hamas leadership facilities and terror and smuggling tunnels.”

An anti-tank rocket fired near the Gaza border wounded two Israeli soldiers on Friday, and Israel said it had targeted seven Hamas militants accused of involvement in rocket attacks.