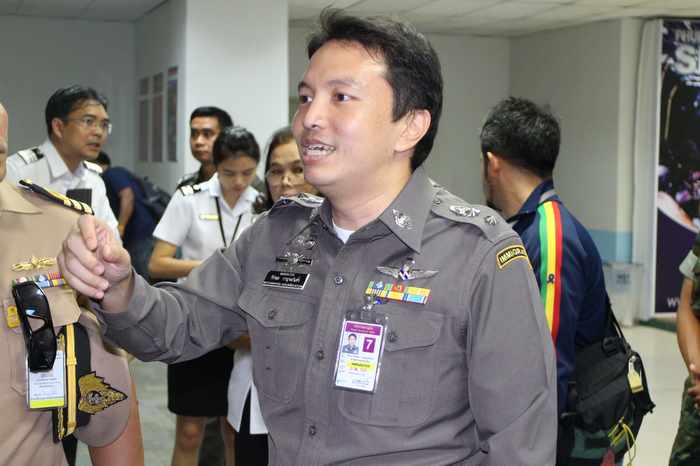 On Wednesday, one of the top-ranking officers who led a Monday raid of the airport declined to reveal to the Phuket Gazette whether or not his officers were continuing their investigation into the alleged corruption.

He also declined to say whether or not his officers would be reviewing CCTV footage taken within the immigration arrivals hall at Phuket Airport for evidence of whether or not the alleged cash for clearance payments had been routinely collected.

The military officer also declined to be named.

Armed military personnel and a battery of local officials arrived in force at the airport on Monday morning to launch a campaign to arrest all taxi drivers who illegally pick up passengers at the facility (story here).

“We have heard that many immigration counters are not open when tourists arrive on international flights, and officers are soliciting money from them to use a ‘VIP’ lane to avoid the long queues,” Capt Somphong Narkthong of the Royal Thai Navy explained on Monday.

“A total of 19 counters are supposed to be open during international arrivals to support incoming tourists. From now on, every time a counter is closed during this time, immigration will have to explain the reason why to Army officers.”

Airport Immigration Deputy Superintendent Watcharapol Kanjanakuntorn confirmed that immigration will comply with all orders from the Army, but denied that any officers solicited payments from tourists.

“I have never heard of officers collecting money from tourists. However, if anyone is asked to
pay money to use a faster lane, please report it to me directly,” Lt Col Watcharapol said.

Col Watcharapol told the national media, “In the past, we have had problems with our computer systems and a lack of staff on hand. But right now we are fully prepared to serve all incoming tourists.”