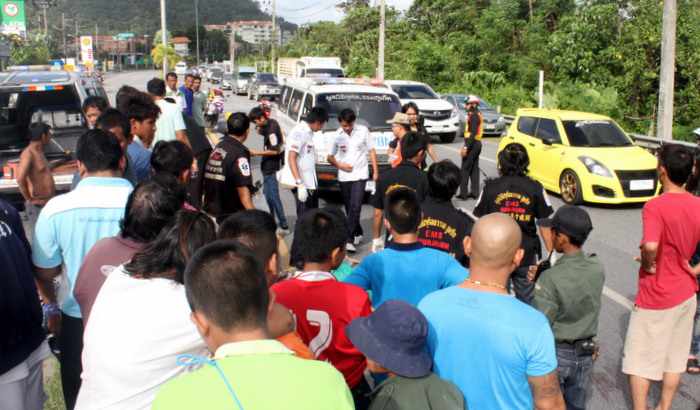 PHUKET: A helmet-less Myanmar national was killed after losing control of his motorbike on a curve while driving with his kickstand down in Phuket yesterday.

When police arrived at the scene on Phra Phuket Kaew Road, they found 27-year-old Phyo Maung Maung’s motorbike, with the kickstand down, on the median and Mr Phyo’s body in a lane of oncoming traffic.

“It’s possible that as he was leaning the bike to take the curve, the kickstand struck the road and caused him to lose control,” said Capt Wattanathorn Bamroongthin of the Thung Thong Police.

A witness said that Mr Phyo had been driving fast when he lost control, crossed the medium and struck a car.

The driver of the car, Wanwisa Kachenthorn, 22, was in hysterics and unable to describe the event to police when they arrived.

However, a witness who had been driving behind Ms Wanwisa was able to recount what happened.

“At this point, we have yet to charge Ms Wannisa. We have asked her to come to the police station so we can question her,” Capt Wattanathorn said.