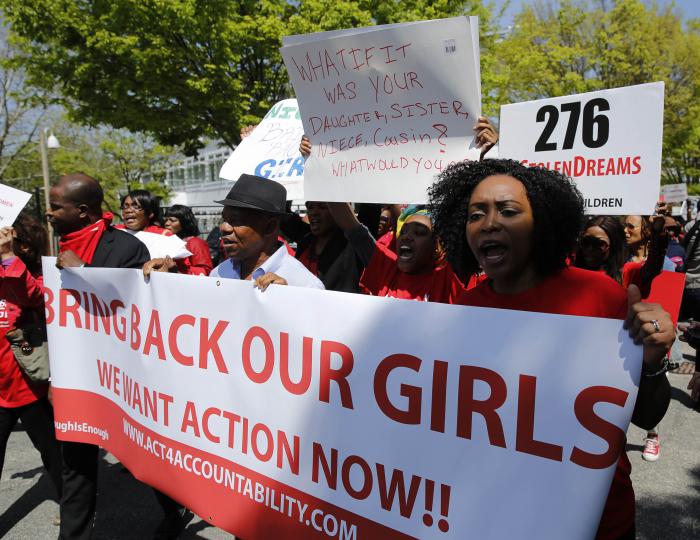 PHUKET: The leader of the Nigerian Islamist rebel group Boko Haram has offered to release more than 200 schoolgirls abducted by his fighters last month in exchange for prisoners, according to a video seen on YouTube.

About 100 girls wearing full veils and praying are shown in an undisclosed location in the 17-minute video in which Boko Haram leader Abubakar Shekau speaks.

Boko Haram militants, who are fighting for an Islamist state, stormed a secondary school in the northeastern village of Chibok on April 14 and seized 276 girls who were taking exams. Some managed to escape but about 200 remain missing.

A government official said “all options” were being considered to secure the girls’ release.

Nigeria has deployed two army divisions to hunt for the girls while several nations including the United States, Britain, Israel and France have offered help or sent experts.

In a 1.25 minute clip of the video on YouTube, scores of girls in black and grey veils sit on the ground and chant, before Shekau, wearing military fatigues and holding an AK-47, addresses the camera. He appears confident and at one point laughs.

“All I am saying is that if you want us to release the girls that we have kidnapped, those who have not accepted Islam will be treated as the Prophet (Mohammed) treated infidels and they will stay with us,” he said, according to a translation of his words originally spoken in a Nigerian language.

“We will not release them while you detain our brothers,” he said, before naming a series of cities in Nigeria. It was not clear whether he was in the same location as the girls.

The government has seen the latest video, Mike Omeri, a senior official in the Ministry of Information, told a news conference.

“The government of Nigeria is considering all options towards freeing the girls and reuniting them with their parents,” he said.

Authorities are holding hundreds of suspected Boko Haram militants and there have been several jail break attempts. Suspected militants overpowered guards at a prison near the presidential villa in Abuja in March, triggering a gun battle that killed 21 people.

In another incident the same month, insurgents attempting to free captured comrades fought a two-hour battle in March at Giwa barracks in the northeastern city of Maiduguri.

Human rights groups have said previously that Giwa barracks has been used to illegally detain and torture suspects, something the military denies.

The Nigerian government has been criticised for its response to the abductions but President Goodluck Jonathan said on Sunday that international military and intelligence assistance made him optimistic about finding the girls.

A Nigerian military source told Reuters on Monday in Maiduguri that two foreign counter-terrorism units were already on the ground.

“They have visited Chibok on Sunday for preliminary investigation with our troops and experts before fully kick-starting the rescue mission,” the source said.

Jonathan will attend a summit in Paris on Saturday to discuss security in the region.

“The objective is to deepen the cooperation and partnership between Nigeria and her neighbours,” Jonathan’s spokesman Reuben Abati said.

Leaders from Chad, Benin, Cameroon and Niger are also due to attend along with representatives from the European Union, Britain and the United States, likely to be at foreign minister level.

The mass abduction of schoolgirls has touched a chord around the world, and triggered a support campaign using the Twitter hashtag #BringBackOurGirls.

Boko Haram has killed thousands since 2009 and destabilised parts of northeast Nigeria, the country with Africa’s largest population and biggest economy.