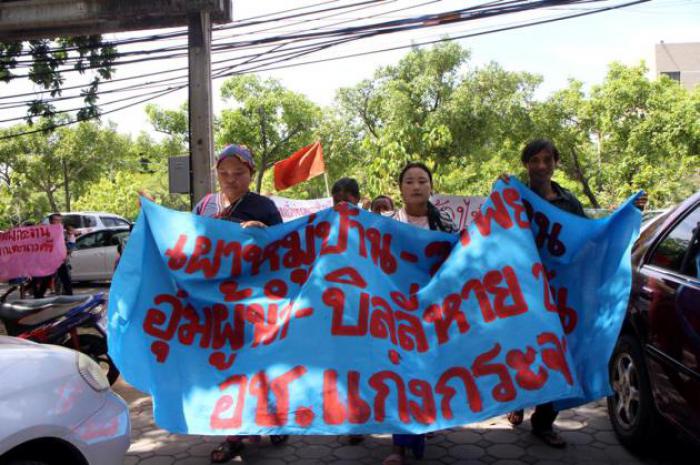 PHUKET: The head of Kaeng Krachan National Park, Chaiwat Limlikhitaksorn, has reportedly sought a transfer – for at least a month – amid pressure over the disappearance of prominent Karen activist Pholachi “Billy” Rakchongcharoen.

Billy went missing on April 17 soon after Chaiwat reportedly questioned him about wild-bee honey he had in his possession.

Chaiwat insisted yesterday that he was not a person who has influence over local authorities investigating the disappearance of Billy. He said he had asked for a one-month transfer to Ratchaburi’s Protected Areas Regional Office 3 (Ban Pong) – to show sincerity and make way for a fair investigation.

About 100 residents from Bang Kloy and Pong Leuk villages in Phetchaburi called on the Department of National Parks, Wildlife and Plant Conservation yesterday to transfer the park chief because of his alleged link to Billy’s disappearance.

“The removal of Chaiwat from his position at the national park would help other authorities speed up their investigation of Billy’s case,” said Phreu Odecha, who led a group of Karen at the protest.

The villagers demonstrated at the department’s head office. They had dozens of hand-made banners demanding that agencies, including the department, step up their efforts to resolve the case.

“Those involved in the disappearance of Billy must be punished,” Phreu Odecha said.

Billy’s wife Pinnapa Preuksaphan, 28, joined the rally to beg the people who “abducted” her husband to show mercy. “I am here to ask you to release him,” she said.

With Billy missing for 22 days, her life had completely changed. She said she now faced a lot of trouble, having to manage all things by herself while taking care of five children.

Niphon Chotibal, acting director-general of the department, has said that park chief Chaiwat told him he had met Billy – but only to ask about the wild-bee honey and that Billy was allowed to go home after the questioning. He had university-student trainees as witnesses.

Samak Donnapi, director of the National Parks Bureau, said Chaiwat had expressed his sincerity before a group of senior officials during a visit to Khao Yai National Park last week. He had asked senior officials to remove him temporarily from the park in the name of transparency during the investigation. Chaiwat’s temporary transfer would take effect by Thursday.

Separately, a social media campaign called “#weallbilly” has been launched to highlight the issue of forced disappearances in Thailand.

Under the campaign, people are invited to post pictures, their name and an introduction message saying that they are Billy, who is reportedly the most recent forced disappearance in Thailand.

PHUKET: Pro-government red-shirt protesters gathering at Aksa Road west of Bangkok are to be protected until 10pm every night, Centre of Administration for Peace and Order (CAPO) director Chalerm Yoobamrung said yesterday.

The protection is needed because violence against them is likely, he said. “If they are attacked, a large number will rise up, and confrontation [with government opponents] will follow.”

On the other hand, Chalerm said he believed that M79 grenade attacks on the People’s Democratic Reform Committee (PDRC), which he described as a mob of thugs, would persist.

“The confrontation will not occur if red shirts are not harmed,” he said. “The PDRC will now rely on violence, otherwise it will lose. It will never win.”

Chalerm said he remained the CAPO director despite being ousted through a Constitutional Court ruling as the labour minister.

He repeated CAPO’s plan to arrest all PDRC or other protest leaders using a combined force of police from various special-operations units, if the Criminal Court approved the arrest warrants for them on sedition charges sought yesterday by the Department of Special Investigation.

Meanwhile, an M79 grenade last night was launched into a site on Chaeng Wattana Road occupied by anti-government protesters led by monk Phra Buddha Issara. It landed near a shelter he has routinely resided in, but the monk was away on a religious trip. The blast slightly wounded two PDRC guards.

A police Explosives Ordnance Disposal unit was allowed in to inspect the scene yesterday morning and revealed another M79 round had been shot into the protest site. It landed in a military barracks next door.

The monk had gone back to Wat Or Noi in Nakhon Pathom where he is the abbot. He will return today.

An ice deliveryman who was stabbed by PDRC guards on Sunday was unconscious but in a safe condition yesterday, Rajavithi Hospital director Dr Udom Chaovarindr said.

Thanakrit Pinwises, 29, was unable to speak and needed to remain in an intensive-care unit for another four or five days for further treatment for stab wounds to his lung and liver.

At around 11.30pm, Thanakrit drove his ice-delivery pickup past Channel 5, where the PDRC had a rally stage.

He hit a traffic cone left by the guards and got out of his vehicle to apologise.

The guards allegedly attacked and stabbed him. He was helped to the hospital after his pregnant girlfriend called for help.

There were also reports of the guards forcing foreign tourists heading to Don Mueang International Airport off a bus, forcing them to walk.

‘No road map to end crisis’
The Nation / Phuket Gazette

PHUKET: Efforts to find a way out of the political stalemate were under way yesterday, with senators convening an informal meeting to discuss possible solutions to the crisis.

The caretaker government is still insisting on its legal mandate and the ruling Pheu Thai Party hit back at their political rivals, and judges who recently issued a ruling against them.

Acting Senate Speaker Surachai Liengboonlertchai, who chaired an informal meeting of senators aimed at finding a solution to the crisis, said yesterday the ongoing political conflict was worsening and threatening to become violent and spin out of control. He noted that the Senate was the only legislative body operating, after the House of Representatives’ dissolution last December.

Surachai said he did not think the Senate discussion would reach a conclusion on a possible way out by yesterday, a deadline set by anti-government leader Suthep Thaugsuban, who threatened to take the matter into his own hands unless a new prime minister was appointed by then.

“The problem has accumulated for more than 10 years. We won’t be able to solve the problem within a day. We’ll try to do it as quickly as possible in a way that is fairest for the country and for the people,” said Surachai, who was elected on Friday by fellow senators to become the new Senate speaker.

He declined to answ