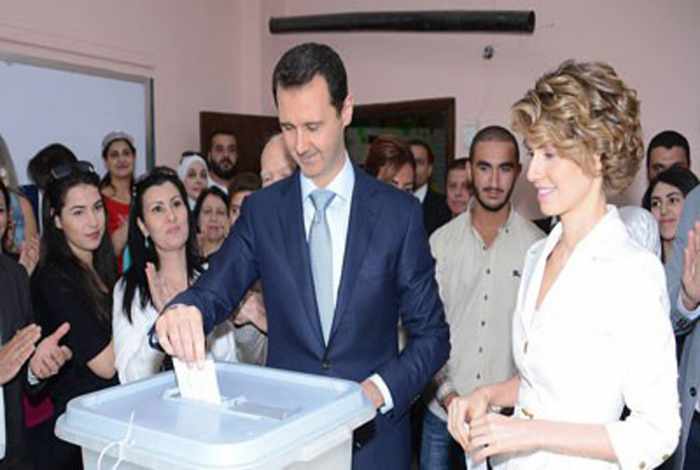 PHUKET: President Bashar al-Assad has secured a landslide victory in a wartime election that was condemned as a sham by his opponents but demonstrated his tenacious hold on power after three years of brutal civil war.

Parliamentary speaker Mohammad al-Laham said Assad secured 88.7 percent of votes cast in the election, which was held mainly in the central and western parts of the country, where his forces hold sway.

“I declare the victory of Dr Bashar Hafez al-Assad as president of the Syrian Arab Republic with an absolute majority of the votes cast in the election,” Laham said in a televised address from his office in the Syrian parliament.

Even before he spoke, celebratory gunfire and fireworks erupted in Damascus in anticipation of the news. Three people were killed in the capital and 10 were wounded by the gunfire, the Syrian Observatory for Human Rights monitoring group said.

Nearly an hour after the announcement, heavy shooting could still be heard, despite an appeal by the victorious Assad that “joy and enthusiasm” could not justify the danger caused by the celebratory fire.

State television showed crowds cheering and dancing in Damascus, Qamishli in the Kurdish northeast of the country, the Druze city of Suweida in the south and the contested city of Aleppo in the north.

Syria’s constitutional court earlier said that turnout in Tuesday’s election and a previous round of voting for Syrian expatriates and refugees stood at 73 percent.

Assad’s foes have ridiculed the election, saying the two relatively unknown and state-approved challengers offered no real alternative to Assad. Former minister Hassan al-Nouri got 4.3 percent of the vote while parliamentarian Maher Hajjar secured 3.2 percent, fewer than the number of spoilt ballots.

They also said that no credible poll could be held in the midst of a conflict that has killed 160,000 people, driven millions from their homes and put swaths of northern and eastern Syria beyond Assad’s control.

“These elections are illegitimate and undermine the political efforts to find a solution to this horrific conflict,” the European Union said in a statement.

The United States, which has repeatedly said Assad lost his legitimacy when he responded with force to an outbreak of protests more than three years ago, said the vote changed nothing.

A coalition of Islamist rebel fighters described the vote as “Elections of Blood” and said it had no legitimacy.

Syrian officials had described the predicted victory as vindication of Assad’s three-year campaign against the rebels and a landmark for democracy – the first time in half a century that Syria has held a contested presidential election.

For many Syrians voting on Tuesday, politics took second place to the yearning for stability and security after three devastating years of conflict which grew out of the mass protests in 2011 against Assad’s rule.

For the country’s minority Alawite, Christian and Druze communities, the Alawite president offers a bulwark against increasingly radical Sunni Muslim insurgents and the promise – however remote – of a return to stability.

The official figures also suggest that many of the majority Sunni Muslims turned out to vote for Assad, whether out of weariness with the conflict or fear of retribution if they did not vote.

Previous presidential votes had been referendums to approve the appointment of Bashar and his father, Hafez al-Assad, who ruled for 30 years until his death in 2000. Hafez never won less than 99 percent, while his son scored 97 percent in 2007.

China sentences nine to death for terrorism in Xinjiang